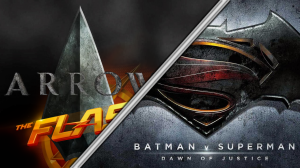 Since Warner Bros. Pictures and DC Entertainment announced their intention to create a connected live-action filmic universe with their DC Comics characters, kicking off with last year’s Man of Steel, there has been much speculation — and a loud rumbling amongst the fanbase — as to whether the DC television properties would be rolled into that universe. During the CW show presentations at the Television Critics Association press tour on Friday, DC Entertainment Chief Creative Officer Geoff Johns sought to provide clarity to that issue.

During the session, Johns stated definitively that “the film and television universes for DC Comics ‘are separate worlds.'”

Fans hoping for a narrative structure similar to the Marvel Cinematic Universe that happily includes both of the ABC series Marvel’s Agents of S.H.I.E.L.D. and the upcoming Marvel’s Agent Carter, as well as the forthcoming Netflix block of series, are sure to be disappointed. While the dark world of Arrow‘s Starling City would seem to slip easily into the tone of the nascent DC Movie Universe as established in the Henry Cavill-fronted Superman film, it appears it is not meant to be, at least for the time being.

This is not altogether surprising, as Stephen Amell announced earlier in the month that he was definitely not in Batman v Superman: Dawn of Justice. The 2016 film is said to feature a number of cameos from very prominent members of the DCU in anticipation of setting up a full-fledged Justice League movie, rumored to be released in May 2017. While it’s unclear if Green Arrow will be featured in Justice League, the Flash is a core member of the group. With a potential planned movie also teaming the Scarlet Speedster up with one of the Green Lanterns, it makes sense to clearly delineate early on that Grant Gustin is not their movie version of the character.

No doubt we’ll be hearing more on WB’s plans for the DC Movie Universe coming out of San Diego Comic-Con International over the next week. For now, the DCMU and the Arrow/Flash-verse are separate planes in the Multiverse. Of course, things are always subject to change.

Craig Byrne contributed to this story.