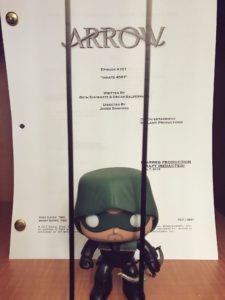 Incoming Arrow Executive Producer Beth Schwartz has revealed a title and credits for the Season 7 premiere of the series!

Arrow Season 7 begins Monday, October 15 with an episode that we now know to be called “Inmate 4587.” What does the 4587 signify? Perhaps that is when the first issue of Mike Grell’s comic book series Green Arrow: The Longbow Hunters came out? We don’t know, but we’d guess that we’d have an answer to that question sometime between now and the October season premiere.

UPDATE: We have the answer! Marc Guggenheim told a fan on Twitter that he’s a fan of the TV series Wiseguy, and that Arrow and Legends are both full of Wiseguy Easter eggs. On that series, 4587 was Vince Terranova’s “ident code.” Mystery solved!

The episode is written by Beth Schwartz and Oscar Balderrama and it will be directed by James Bamford who has now helmed several Arrow season premieres and major episodes.