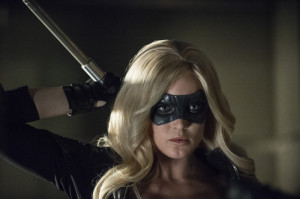 Good news: The CW has announced their 2014-2015 schedule and Arrow is remaining on Wednesday nights at 8! Spin-off The Flash will air on Tuesdays at 8.

When The CW made their announcement via press release, they also released a synopsis with hints of what we can expect from Season 3. Could the mention of Caity Lotz mean she’ll be a series regular? We don’t know, but here’s the description just the same:

After a violent shipwreck, billionaire playboy Oliver Queen (Stephen Amell) was missing and presumed dead for five years before being discovered alive on a remote island in the Pacific. He returned home to Starling City, bent on righting the wrongs of his family and fighting injustice. To do this, he creates the persona of the Arrow and allies himself with former military man John Diggle (David Ramsey), computer-science expert Felicity Smoak (Emily Bett Rickards), street brawler Roy Harper (Colton Haynes) and international assassin Sara Lance (Caity Lotz), while keeping his secret from those closest to him including his sister Thea (Willa Holland), who has allied herself with his most deadly enemy. Rivalries and allegiances will shift as Oliver faces his most difficult challenge yet. Based on characters appearing in comic books and graphic novels published by DC Entertainment, ARROW is from Bonanza Productions Inc. in association with Berlanti Productions and Warner Bros. Television, with executive producers Greg Berlanti (“Green Lantern,” “Brothers & Sisters”), Marc Guggenheim (“Eli Stone,” “Percy Jackson: Sea of Monsters”), Andrew Kreisberg (“Warehouse 13,” “The Vampire Diaries”) and Sarah Schechter.