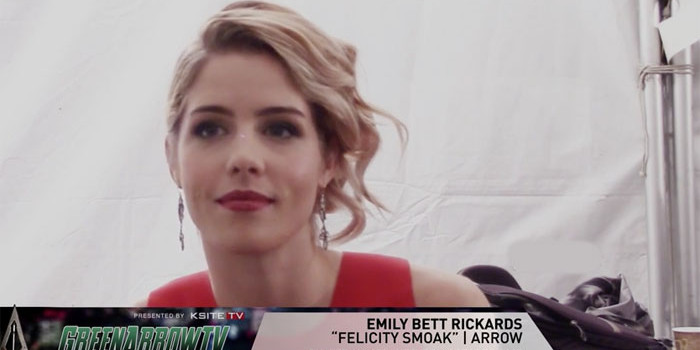 Arrow on Set: Emily Bett Rickards On Ray, The Death, & The Engagement Ring

Last week, we traveled up north to the Vancouver studios of Arrow and were able to talk to many members of the show’s cast.

One of those cast members was the very popular Emily Bett Rickards, who plays Felicity. Many topics were discussed, from Ray’s return through to Damien Darhk and the flashforward at the end of the season premiere. The topic of the engagement ring that Oliver has for Felicity also comes up.

You can watch the interview below. Don’t miss a new episode of Arrow TONIGHT (October 28) at 8PM on The CW!

“As cast mates, we’re all like ‘is it you? Is it you? Oh, it could be you. No, you know what, it’s me. It has to be me. It has to be you… it’s gonna be them. It’s gonna be no one. No one’s in the grave! Like, that conversation happens daily,” she says of the on-set discussion on who it could have been in the grave. “And everyone proves that it’s not, and then proves that it is, and then is like ‘but then there’s this’ and ‘nobody can die because there’s the Pit, and there’s time travel, and if we travel to the Flash, we could just bring you back to life’ … just like ‘oh my God.’ I said to one of our writers, ‘I don’t really want to know, but, like, do you know?’ and they were like [boooop]…. and then I was like ‘Are you lying? I can’t tell’.”

“I think it’s good storytelling, and I think a flashforward was a really smart idea, and they’re brilliant. They surprised me, and I like story for story, so I was happy to see that.”

And, regarding the “Olicity” engagement ring, Emily seemed impressed with it… but has it come up again yet? “That thing is big! I haven’t tried it on yet, though, so we’ll see,” she says.