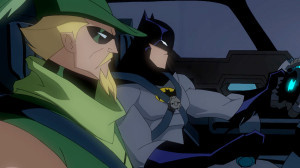 Part of the problem with a user-submitted site like the Internet Movie Database is that people can submit their own information, which isn’t all vetted… that can lead to such nonsense as “Kara Zor-El is in the Flash pilot” or a whole listing for a Smallville follow-up series called Metropolis.

Today’s nonsense comes courtesy of a purported description for the 21st episode of Arrow Season 2, that was posted on IMDb today.

Here is what it says:

“Oliver gets a business opportunity from a famous billionaire from the neighboring Gotham City.”

Sounds cool, right? Too bad it’s more made up nonsense.

Stephen Amell was asked directly about this on his Facebook page, and he got an answer to the “is it true?” question with one word:

Realistically, episode 21 of Arrow Season 2 isn’t even written yet. Even if it was, it is doubtful a synopsis that far in advance would leak. Finally, Stephen Amell has always been as upfront as possible with fans — if this was indeed something that would happen, he’d probably avoid the question, if anything.