The Season 8 premiere of Arrow is on The CW in exactly four weeks from the time of this writing, airing Tuesday, October 15, and one of the new series regulars for the show’s final season is Katherine McNamara who made her first appearance as Mia Smoak a.k.a. Blackstar in Season 7.

By the end of last season, we found out that Mia was the daughter of Oliver Queen (Stephen Amell) and Felicity Smoak (Emily Bett Rickards), and her presence in Season 8 will keep that “Olicity” legacy alive.

GreenArrowTV’s Craig Byrne spoke with Katherine about what it was like to fill that legacy at a party during the Television Critics Association press tour earlier this summer. Along the way, Kat also included references to her sadly departed but always beloved Freeform series Shadowhunters where she starred as Clary. 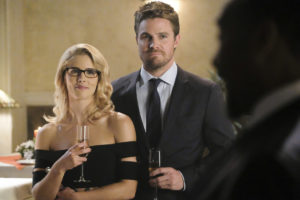 GREENARROWTV’s CRAIG BYRNE: What was your reaction when you found that they’re playing the daughter of Oliver and Felicity?

KATHERINE McNAMARA: I was speechless, and a little terrified, and I knew I had a lot of work to do, because I hadn’t watched all of the show yet. But I knew, because with Shadowhunters we had Malec, and we had Clace, and all of those relationships, so Olicity was always in that mix, and I knew how much the fans cared about them. And then I said, “all right, well, if I’m their kid, then I’m going to watch the entire show.” And after watching the show, I get it, bcause Stephen and Emily have spent so much time crafting, not only their individual characters, but the relationship together. It’s so beautifully done and so nuanced, I wanted to be able to bring in as many elements of both of them as possible.

And I keep doing that. Even now, I try to take the little things that Stephen does physically, or I asked the writers to add a couple “Fracks!” to the script the other day, just to keep that alive. 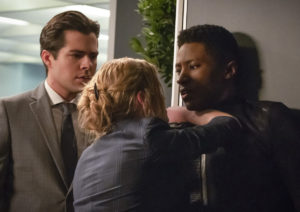 GATV: Might we see you in a costume this season?

KATHERINE McNAMARA: I don’t know. They don’t tell me anything. I get the scripts, and then I find out what happens.

What’s interesting about this season is, Mia was raised in isolation. She was raised in the woods by her mother who was very guarded. She was trained by Nyssa al Ghul who is by nature a lone wolf. And now this season, she has learned how to be a part of a team, and she doesn’t play well with others.

That’s a very interesting thing to see – how successful or unsuccessful she is at that. And also with that, she’s not used to being responsible for someone else. She promised her mom she take care of Williams. She can’t fight for him. He can’t defend himself as well as she can. That fear… having someone else at risk who you can’t take care of all the time. You’re not always in the same place. She can’t always be right there to protect him and that’s terrifying, so that’s a lot of what she has to deal with this season. 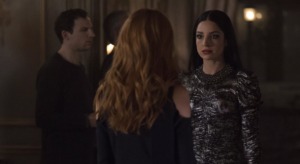 GATV: When you were doing your watch of Arrow, were you amused to realize that you had fought William’s mother (Anna Hopkins, who played Samantha) on Shadowhunters?

KATHERINE McNAMARA: Yes! I was! I love Anna Hopkins so much. I find it funny. I joke with her all the time. She’s my evil stepmom in everything. She’s been the mom to him, and she’s been the demon mom of my brother in Shadowhunters. Anna’s my evil stepmother, and I love it.

Arrow returns October 15 on The CW. You can see some photos from the season premiere here!