Arrow Brings Back [SPOILER] In “Fundamentals”

Warning: Spoilers for the Arrow episode “Fundamentals” are within. If you’re on the West Coast or in a country that has not shown the episode yet, you might want to wait to read this! 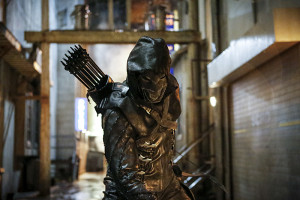 Often times with Arrow, a major casting coup is spoiled in advance. Paparazzi catch the actors in Vancouver. Someone might errantly post a picture on social media and fans figure it out. Or something might slip at a convention. It even happens when The CW announces something big themselves, either in a press release or an official episode description.

Tonight’s episode of Arrow was a big deal because there was a huge guest appearance that fans didn’t seem to expect. No, it wasn’t Raisa the Maid (Kathleen Gati) though it was wonderful to see her again. Instead, thanks to the drug Vertigo, we got to see one of Arrow’s absolute best villains, Adrian Chase as played by Josh Segarra, again.

At a time when Oliver Queen again has been worn down to his core, the Vertigo as well as this foe poked at everything that has been on Oliver’s mind, including his relationships with Felicity and William and his still unresolved issues involving Laurel’s death. And there’s change coming, as Oliver has decided that his role as the Hood is again a one-man mission. And that, friends, is the episode’s other return: Are we back to the “Hood,” and not Green Arrow? We’ll have to keep watching and find out.

Stephen Amell hinted online when “Fundamentals” was shooting that he was working with someone he hadn’t gotten to work with in a while… we, at least, had no idea it was Josh Segarra.

If you haven’t seen the episode yet, you should check it out. If you have seen it and want to talk about it with other fans, zipline over to our Arrow forum.