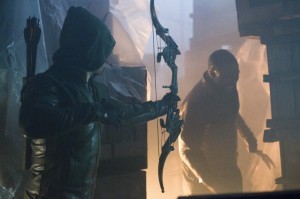 Warning: SPOILERS are discussed within.

The second episode of Arrow’s second season airs tonight at 8PM (ET) on The CW, and, like the previous week’s, it’s another fantastic episode that ranks miles ahead of a few of those other comic book inspired shows that have hit the air lately (that list includes that Marvel show and even The Walking Dead).

It’s not absolute perfection, but there are enough moments within to give audiences a bit of everything. The episode starts with a newly updated “My Name Is Oliver Queen…” montage and quickly cuts to Roy Harper trying to be a hero to the people of the Glades. He’s not the only one who wants to be a hero there — the Glades’ alderman, Sebastian Blood, also is demanding help for that borough, and in his crusade for more political power, he’ll do several things to make Oliver Queen look bad in the process. 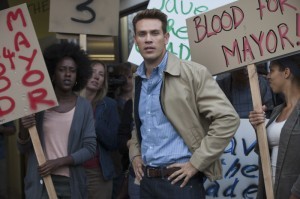 Kevin Alejandro — who did a good job of being a pain in the neck on Greg Berlanti’s other recent series, Golden Boy — is now doing a good job as a pain in Oliver’s neck here. I like him; he’s a good actor and it’ll be interesting to see what brother Blood does on the show in the future. It’s also interesting that, like Isabel Rochev, he’s a threat to Oliver Queen, not necessarily his emerald alter ego. 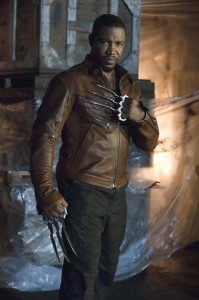 That’s not the only character introduction we see in this episode. Michael Jai White plays the Bronze Tiger, a character most famous in the comics for his role in the “Suicide Squad.” Sadly, we don’t get to see much of the Bronze Tiger here, nor do we see as much with China White (Kelly Hu) as I would have liked… but, I’m pretty sure their stories will be picked up again sooner rather than later. The Bronze Tiger has a different look than he’s had in the comics; however, it works here being all Arrow-fied and realistic. Face it, if they had gone the wrong way with this people would have started chanting “Wolverine!” at the TV.

Roy Harper (Colton Haynes) gets some good character moments this week, including some great early-episode talks with Laurel and Oliver. To see the Laurel-Roy interaction is particularly interesting, as it shows how Laurel’s fascination with the Hood from last season compares to how Roy is currently feeling. An element from the Arrow pilot is reintroduced and ties to the past and the present in interesting ways. As for Laurel, we learn another reason why she’s not a fan of “the vigilante” — and that reason might not be the reason you expect. 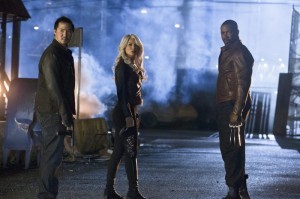 There are some elements of the episode that didn’t completely work for me, I do admit. Sometimes I am so wrapped up in the present day storylines that I’m not really interested or feeling the flashback elements; although, as we’ve seen from episodes like “The Odyssey,” sometimes the flashbacks really work. I also felt Felicity was a bit too snarky at points of this episode to the point of becoming annoying. I’m a huge fan of Felicity Smoak, but after several years of Smallville I’m so weary of when the plucky sidekick starts constantly sassing the boss. Hopefully that will tone down sooner rather than later. Weirdly, I’m okay with it when it comes from Diggle, mostly because this is a guy with military experience to back that up. Speaking of Diggle, can we give this guy a code name sometime so the Hood isn’t going around calling his name where anybody can hear it?

Again with the “other comic book TV show” comparisons, Agents of S.H.I.E.L.D. has been priding itself for the end-of-episode teasers… well, let me put it out there that the final moments of Arrow tonight will blow all of those S.H.I.E.L.D. teasers away. Dynamics are changing, and I can’t remember a show leaving us on cliffhangers this good since the early seasons of Alias. Definitely be sure to watch!

Take a look at some preview images from “Identity” here!