Summary: The big death episode is one of the better chapters on the season with a genuinely emotional climax.

With an ominous title, even if one weren’t aware that this was the episode that answered the season-long question of who was in the grave, they could guess this was an hour with some kind of ending or big change. The title refers to the declared time of death for Laurel Lance in the episode, but the time in the real world frequently refers to the last minute of something or the precipice of change. The eve before a new day, a new world, a new reality.

I talk at lengh about Laurel’s death here, but let’s talk about the episode preceding it.

Though Oliver and Laurel have known each other the longest amongst them, the longest relationship specifically related to Team Arrow is that between Oliver and John Diggle. Diggle was the first to learn of and sign on to Oliver’s campaign, not only as support but as a moral compass that Oliver desperately needed when he first returned to then Starling City. That dynamic has helped both to heal and mature as men, but it’s also often put them at loggerheads with each other. They are stubborn and righteous, and while that propels them forward with their hero work, it has threatened to tear them apart at various points.

There are times when this contentiousness plays well and feels natural; it should always feel like gears grinding in their methods from time to time because they just don’t quite fit together but make it work. Other times, it feels kind of forced depending on how thickheaded they’ve regressed one or the other (usually Oliver) into acting at a given time. This episode falls between those, though it feels a bit more natural given the trouble they had to start the season. 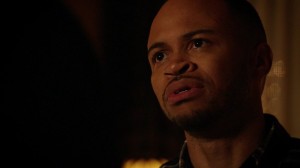 Give the episode points for trying to convince us that Oliver wasn’t right about Andy. Sure, keeping him locked in a tiny cell for weeks and offering moments like the brothers playing cards with one another was meant to give the impression that Andy could change, but it honestly never felt like he’d really turned coat on his H.I.V.E. cohorts. When it was revealed last episode that Merlyn was employing Andy for his plans to break Damien Darhk out of Iron Heights, it wasn’t really a shock. So, to introduce even the slightest unsurety that Oliver’s instincts were dead-on was a job well done for the hour.

Eugene Byrd gets to stretch his legs more as Andy this hour, and it’s a welcome addition. In retrospect, it would’ve been nice to see more of John and Andy and the team working with Andy over the last few weeks to better set up the betrayal. I’m sure availability, as well as other story threads to explore, made it tougher to feature Byrd in more episodes, but given his work here, we missed out.

We also get some more fun from Neal McDonough as Darhk. The magic idol is ten kinds of cheesy, especially being as big as an oversized kickball, and it feeds into this weird B-movie kind of feeling with the magic that has rendered the flashbacks tough to watch and care about. Here, McDonough turns right into the skid. Some might find this brand of villainy a bit too over the top, but it certainly makes for some amusement to help keep the proceedings afloat. Darhk versus Malcolm Merlyn is an exercise in garishness, but their moments of confrontation while working together here dance off the screen, a tribute to the joy and connection between McDonough and John Barrowman. 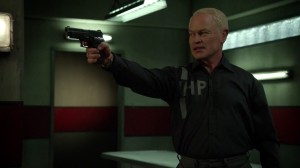 What works about Darhk is that McDonough can handily lace the exaggerated with throughline of menace that can make his threats hold genuine merit. He had to follow through here, though, to really drive home the point that he is a formidable force for Oliver and Team Arrow to contend with. Hats off to the show for not skipping a beat; Darhk gets his powers back and immediately makes good on the threat he gave to Quentin Lance. With five episodes left, and Darhk fully aware of who all the members of Team Arrow are, it re-establishes the immediacy of the stakes. Given the show’s recent complacency, this was necessary in the run-up to the finale.

This also extends to the new mayor of Star City, Ruvé Adams, Mrs. Damien Darhk. When she made her offer to Laurel to step into the role as District Attorney, it seemed a bit fishy on a couple of levels. The first, obviously, was that it was a bit convenient that Ruvé would want to keep Laurel so close. The team saw it as an advantage, but with Laurel representing the prosecution of her secret husband, the ulterior motive was naked and apparent. The team was operating under the assumption that the bad guys didn’t know who they were, but it had to be fairly obvious. Particularly given level two, in a metropolis like Star City, it seems unlikely that Laurel would be qualified for the position. (Not to mention that DAs are typically elected positions rather than appointed ones. Though, with the DA shifting to another position, appointment to fill the remainder of the term probably fits.) Sure, she’s been an ADA for a couple of years now, and she has had a few high profile cases (Frank Bertinelli, Moira Queen, Damien Darhk), but it still seems premature.

The offer gives us reason to examine Laurel’s role with the team, with the city, and with the future. Admittedly, the idea of Laurel giving up her mask to take on the DA job felt forced. This is one of those situations where it would’ve felt more organic by introducing the proposal at least in the episode prior. Sure, we are presented with these kinds of opportunities at a moment’s notice in life, but in having so much discussion about Laurel putting the Black Canary to rest, it made her skewering by Darhk far too inevitable and telegraphed. The conversations with both Oliver and her father about what she should do and what she could accomplish were both great character moments, and it felt fitting to have those with the two people she’s known longest in her life, mother and sister aside. If anything, Katie Cassidy was given a good episode for Laurel to go out on. 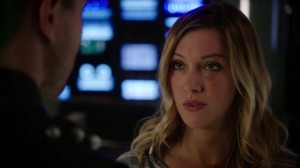 It’s interesting that Oliver seemed so insistent on Laurel having to give up their lifestyle to become the DA. He’d always alluded to it but he never explicitly said he would give up being Green Arrow if he was elected mayor. Certainly, in the comics, he fulfilled both roles at the same time before the public found out the truth and he was forced out of office. He was convinced he had to do things in the light, which is why he ran for mayor. And he’s more than intimated that he feels his work as the Green Arrow is the darkness, even with the positive changes this season. I guess he expected to completely hang up his hood, so offering Laurel advice to do the same makes sense.

Her death is meant to be a catalyst. While I can agree with the intention, it feels too often like a safety net the show falls back on to create new drama. This is arguably the most prominent death on the show to date, and I really hope that the magnitude is both recognized and felt in the DNA of the series going forward. For this season, at least, exploring yet another loss of the past Oliver had, as well as Diggle’s guilt over trusting Andy that directly contributed to Laurel’s passing can be strong threads. One wishes, though, that more clever methods than death could be found to generate change and story motivation.

Still, the scenes in the hospital were some of the best on the season. We’ve been reminded occasionally of the history between Oliver and Laurel this year, and their final exchange was one of the best between Stephen Amell and Cassidy. It was touching to hear Laurel refer to Oliver as the love of her life, and it also informed why she had trusted and stuck with him through all the craziness of the last four years. In all honesty, it was a bit eye-rolling to have Laurel offer some propping up of the importance of the connection between Oliver and Felicity on her death bed, a de facto torch handoff to nod to the comic history. The season has done well to demonstrate the relationship’s importance and didn’t need such clunky dialogue. All in all, it got to solidify the meaning and relevance of Laurel and Oliver’s friendship. It remains to be seen next year what the favor was that she asked of him before she crashed.

That was followed by a devastating bit of unspoken work between Amell and Paul Blackthorne as Quentin shows up to the hospital too late and learns Laurel’s fate from Oliver’s broken reaction. These two play off each other so well that you always wish their were more scenes with them together.

For the most part, “Eleven-Fifty-Nine” was a strong episode. It was a marked improvement over the last few episodes, which seemed to be a bit more on cruise control, and one of the better episodes of the season. The argument that someone needed to die still hasn’t been made, in my opinion, but Laurel’s death should hold a lot of weight for the show and Team Arrow that could fuel a powerful run to cap off the fourth season. If anything, Laurel — and Katie Cassidy — got to go out on a relative high note. Let’s see how much meaning it has.