SPOILER WARNING: This review has been updated to include mention of revelations in the Arrow season premiere which has now aired on the East Coast. As such, if you haven’t watched yet, you should stop reading!

The seventh season of Arrow premieres tonight with an extremely fresh start from new showrunner Beth Schwartz and her team which includes co-writer Oscar Balderrama and director James Bamford. Titled “Inmate 4587” we see what happens when Oliver Queen is in a maximum security prison with some of his deadliest foes while his former team picks up the pieces in Star City. 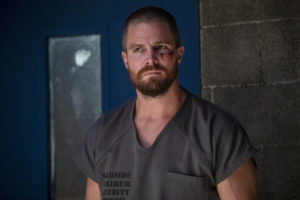 The prison storyline is one that had to be handled just right, and so far it appears to be here. Last season, I couldn’t wait for Barry Allen to get out from behind bars, and the notion of Riverdale’s Archie in jail still seems ill-advised. Yet, here? Oliver is thrown into a veritable snake pit, surrounded by foes like Derek Sampson, the Bronze Tiger, and Brick, all of whom hate his guts. There are also new faces that Oliver meets in prison, including Stanley, who looks up to the Green Arrow as a hero and very well may learn that you should never meet your heroes. Oliver in prison is a bit stoic but with a mix of longing and responsibility for being there. There is also a strong survival instinct and a hope and need for the people he loves to remain safe, especially Felicity and William. There are nightmares and there are injuries. Stephen Amell committed to these scenes 100% and both the dramatic and fight work (all directed by James Bamford) are top notch.

Meanwhile, in Star City, vigilantes are off limits after the deal that Oliver made with Agent Watson. Laurel — now the DA — is crusading against any vigilantes who will be punished to the full extent of the law… something Star City’s new police captain Dinah Drake supports, even if she has had her conflicts with Laurel. Meanwhile, Rene, who is training the young people of the Glades boxing so they can defend themselves, is being told by some of these kids that what he really needs is to continue to be Wild Dog. Things happen that solidify Rene’s position that Star City still needs vigilantes — and this position puts him in direct conflict with Dinah.

What’s most impressive about that storyline, though, is that this is some of the best writing I’ve seen to date with the Dinah and Rene characters. It makes sense that with Oliver off on his own figurative island in prison, the supporting characters in the outside world would all needed to be elevated, and when given such good material, both of these characters who were pretty maligned by the fandom during the whole “OTA vs. NTA” debacle last year are given their best material. They are given full perspectives, realistic motivations, and character with no need for masks to be interesting, and both Juliana Harkavy and Rick Gonzalez “bring it.” I don’t know if this was an edict from new showrunner Beth Schwartz, but I’m very glad to see the well fleshed out roles of Dinah and Rene in this arc. Even the biggest “NTA haters” should be pleased, and it’s seen that even though they have different opinions on the vigilante issue, Dinah and Rene both want the same thing: A safe Star City. This is the thing that tied them to Oliver’s mission to begin with, and they’re both going about it in their own ways. It’s also nice that both characters seem to be returning to their roots: Dinah was a cop, dispensing that kind of justice, long before her meta abilities came to light, and Rene’s instinct has long been to protect his community, especially after the death of his wife. No one else will die on either of their watches if they can help it. 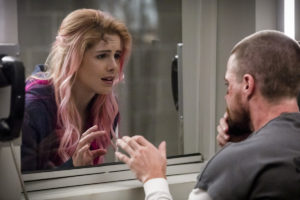 Another character very well handled in the premiere is Felicity. When we first see her, she is in witness protection, calling herself “Erin” and working at a place that this time is not a fictional equivalent of Radio Shack. Again, like the Dinah and Rene storylines, Emily Bett Rickards brings her A-game, whether it’s finding out she’s still “got it” with a fun interaction with a new friend or defending herself in a scene where she does indeed kick some @$$. The bond between Oliver and Felicity is also strong despite their different locations; there is a particular scene, well played by Stephen Amell, where he believes he has lost her, but when we see their reunion, seen in the official promotional photos, Oliver gets a look of relief and love. Despite all the drama and danger around them, it’s still important to see your characters having a “win,” and their reunion, while still being a part of that drama and danger, is a good moment.

Next, there’s Diaz (new series regular Kirk Acevedo) who was also controversial in Season 6, and Arrow seems to have finally cracked the character to see what works. Here, Diaz is far more menacing when we don’t see much of him… so when we do, the drama is up. He has his hands in anything and everything negatively affecting the other characters, and this menace is becoming Prometheus level scary for anyone involved. It’s like there’s a snake (or a dragon, in this case) around every corner that will bite the second you turn your back.

Sadly, we don’t see a whole lot of Laurel, Curtis and Diggle, but we do find out that those last two are working together at ARGUS, and they seem well adjusted and happy. I have no doubt bigger stories are coming for them as everything intersects; we’ve already seen shots in trailers with a lot of the old gang reunited.

Beth Schwartz wrote the classic Arrow Season 2 episode “Seeing Red” with Wendy Mericle, and I remember when watching the episode in a room with other press, when Slade killed Moira, there was a collective shock that made the following press Q&A silent for a few minutes. So, when we realize that the character seen in the future is William after Felicity gives him the hosen, all of us in the room had our jaws on the floor. What, a flashforward?!?! Yep, that guy from the flashforwards the older William, and we’re looking to the future for Season 7. Obviously, when watching the episode live, there is confusion at first as to who the guy on the boat is, but once the hosen thing happens, we know. The actor cast as the older William looks uncannily like both Stephen Amell and Jack Moore, and yes, that is Colton Haynes in old age makeup.

Arrow Season 7, at least from the premiere, feels confident, and Arrow at its best is always confident. With attention and love given to the supporting cast, everyone bringing their best work to these characters, and such surprises, I think we’re in for a strong season. To be fair, I feel like Arrow almost always has had amazing premieres, though not all of them left us with all of the questions left here. I’m very curious to see what comes next.

Arrow Season 7 premieres at 8PM Monday, October 15 on The CW. See some photos from the season premiere here.