NBC’s Constantine was an interesting series for TV last year. The show did some fantastic episodes — “Danse Vaudou” being my choice for a “must watch” — and quality wise, it got better and better as time went on. NBC ordered additional scripts beyond their initial 13-episode order, but decided against actually producing more than those 13. 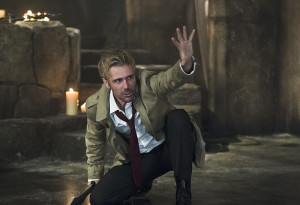 One could argue that the Constantine fandom had not yet bubbled, and when NBC passed, the “Hellblazers” got louder and louder, and there certainly was a fan base by that point that NBC probably didn’t realize was out there. Rumors of the show moving to Syfy or even The CW didn’t come to pass, even though a press call to Mark Pedowitz during the Upfronts even included a Constantine question. Stars including Arrow’s Stephen Amell said they’d appear if Constantine was saved. This summer, the announcement that Matt Ryan would reprise his role as John Constantine on Arrow was arguably one of the biggest pieces of news from The CW press tour day. For me, as a viewer, it was definitely the news that excited me the most.

Flash forward to now, where the John Constantine episode of Arrow, titled “Haunted,” is airing Wednesday night, November 4. The CW sent the episode out to press a few days early, which makes me happy, because the wait was killer. So how did it turn out? 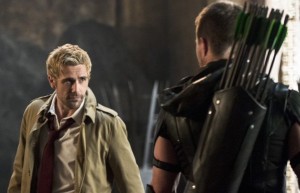 First off, it’s fantastic to see John Constantine again as part of the DC TV universe that he always should have been a part of from the start. Matt Ryan fits right in to his old character, though I wish we had seen more of him. The episode — written by the team of Brian Ford Sullivan & Oscar Balderrama — gives John some great lines in the scenes we do have him in. I will say that I always hoped or expected TV’s John Constantine to be a bit more of an insufferable a–hole but at least this is consistent with the way the NBC Constantine TV series portrayed the character. John is brought in to help save the soul of Sara Lance, and his appearance is consistent with the Darhk magic storyline that’s been going on all year. 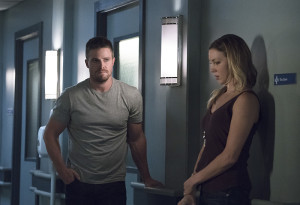 “Haunted” also contains some character building that I expect to be controversial to the Arrow fandom, in that there are some much-needed conversations had between Oliver Queen (Stephen Amell) and Laurel Lance (Katie Cassidy). It feels like it has been years since the two of them actually had a heart-to-heart and talked, but it’s also necessary considering that Oliver seems to be in a much more grounded and mature place. Both actors do really well with their respective roles, and it’s a reminder of something that doesn’t seem to be mentioned much these days, that Oliver and Laurel were childhood friends, along with Tommy. I don’t think it’s a spoiler to say it gets the two of them into better places, which is good, considering Oliver’s new campaign manager (played by Enlisted’s Parker Young) wants him to drop Laurel as a friend entirely. 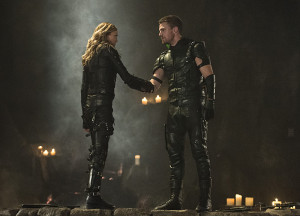 I say this is “controversial” because I know that the Olicity (Oliver & Felicity) fan contingent isn’t a fan of Oliver and Laurel interaction at all, but I look at it this way: There is nothing wrong with Oliver being friends with more than one woman, and at the end of the day, when the battle is over, the person he goes right to is Felicity. There isn’t a love triangle going on at this point that I’m aware of, just a rebuilding of a friendship that was lost years ago, and I think that’s a great thing. 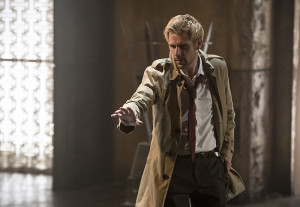 But back to Constantine: I know Arrow isn’t “Constantine takes over Arrow,” but I do admit I wish I had gotten to see more of Matt Ryan, maybe a buddy episode teaming Oliver with John Constantine instead of a part of the larger Arrow arc. Doesn’t Constantine need help stopping the rising darkness? If this is our last time to ever see Matt Ryan as John Constantine, I’ll be a little disappointed. But then again, if ratings for the episode are good, maybe some better things will come. Ultimately, “Haunted” is a decent episode of Arrow as far as pushing forward the season arc, but it’s merely an okay episode of Constantine. I hate to sound spoiled, but I definitely want more…. and if Arrow wants to tie in any more past shows from the DC world into the larger universe, we never did get an ending for Mark Valley as Christopher Chance, the Human Target… just saying. I also hope at some point Constantine is available on DVD or Blu-ray for the whole world to enjoy…. it’s a shame the show isn’t available on CW Seed or anything.

Is “Haunted” a good watch, though? Definitely.

Arrow “Haunted” airs Wednesday, November 4 on The CW. Take a look at some preview images below: 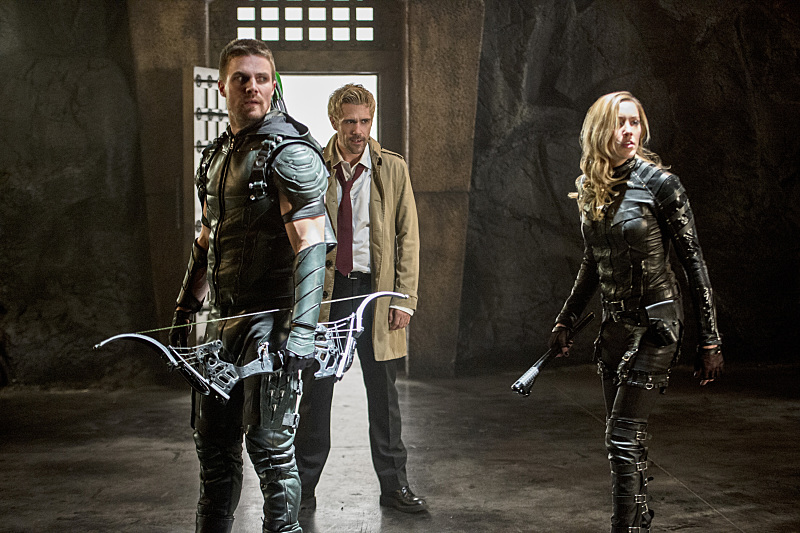