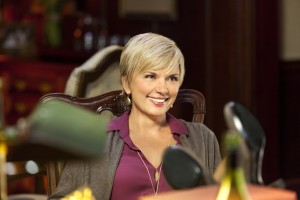 Last week, news broke that Stargate SG-1 actress Teryl Rothery would be guest starring for a multi-episode arc on Arrow… but little was known about who she would be playing.

Here at GreenArrowTV, we’ve got you covered, not only revealing who she will be playing, but also that there’s something very cool about her character: She’s playing a character from the DC Universe who first appeared in the comics over 50 years ago!

Rothery is playing Jean Loring. Fans of DC Comics know Jean as the wife, and then ex-wife of Ray Palmer, a.k.a. the Atom. They might also remember the… extreme lengths she went to to try to win Ray back in Identity Crisis. Either way, Jean is “very different” from the character “Grace” that Rothery plays on her current series Cedar Cove. Here is the official character description:

JEAN LORING is a savvy attorney from the DC COMICS UNIVERSE who would do anything for her clients. Jean makes her way onto “Arrow” as a longtime friend and legal counsel to Moira Queen, who is on trial for her role in the destruction of The Glades, but soon finds herself pulled into the scandalous lives of the entire Queen family. 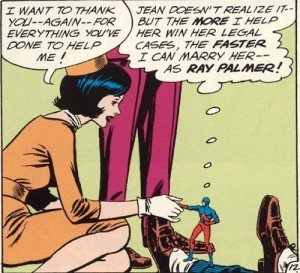 In addition to Stargate and Cedar Cove, the very busy Rothery recently appeared on The CW’s Cult. This is also not her first stop in the DC Universe as she appeared in the Smallville episodes “Talisman” and “Requiem” as different characters. The appearance of “Jean Loring” here might imply that the “Ray and Jean” that Laurel referenced in “The Undertaking” is a not a reference to Ray Palmer and Jean Loring after all… or, maybe she was saying “Ray and Gene” for all we know.

Look for her to make her first appearance on the show in the third episode of Arrow Season 2.