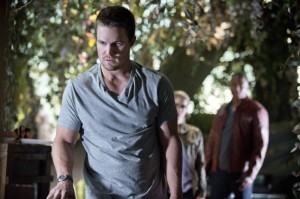 Both of GreenArrowTV’s reviewers are taking on the Arrow season premiere. Look for Matt Tucker’s review to be posted soon!

Read an in-depth recap with trivia on our handy episode guide!

Arrow was firing on all cylinders in last season’s finale, and turned the status quo it had established upside down. “Sacrifice” was a major downer, with every single character suffering some kind of loss and the heroes losing, badly. So it’s quite a surprise that its follow-up—or “sequel,” as the creators put it—manages to be one of the most optimistic hours yet. Even in the wake of so much horror, the characters are not wallowing in despair. They’re justifiably broken, angry and grieving, to an extent, but unlike Oliver’s initial return in the last premiere, they’re dealing with things fairly well.

It makes sense, given that it was a widespread tragedy that affected them, which often evokes larger feelings of sympathy and reflection. Anytime society is faced with mass violence or destruction—shootings, bombings, natural disasters, etc.—even in the midst of political unrest, there’s always an underlying sense that the people in the affected town/city/nation are both brought together and have their fears more focused, for better or worse. All the major players in Arrow lost something personal when the Glades fell, but to declare that their losses are worse than anyone else would be deeply selfish, and there’s solace to be found in that. It’s a surprisingly true-to-life piece of the episode, one that lets it stand tall over the forced melodrama a lesser show would have surely pulled out.

In fact, a twisted repercussion of the Undertaking is that all these characters have been given focus and/or purpose, and have resigned to accept their new lives. Thea has become surprisingly successful at running Verdant, Roy isn’t half bad at being a defender in the night, Moira is freer in prison than she was under Malcolm’s rule, Quentin seems significantly more sober even in his demoted role, and Laurel has a new career and more mature view of her relationship with Oliver. No one is angry, a stark contrast to the early episodes of season one. It’s funny, actually, because Thea and Laurel could feasibly have even more reason to be angry at Oliver for leaving this time. Instead, the growth achieved last year has actually let everyone deal with their issues much more head-on. And thus, in spite of its dark undertones and context, “City of Heroes” is an incredibly hopeful and optimistic hour, running in stark contrast to the first season’s opener. 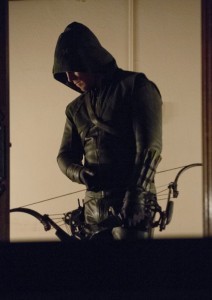 Felicity and Diggle are forward-thinking and hopeful as well, though they’re much more active than most of the aforementioned characters. Opening the episode with their journey to Lian Yu was an inspired decision, and a welcome way to jump right into the story. Some of the funniest moments are here (“You said the parachutes were just in case!” / “Yeah, I meant just in case we made it!”) and started the episode with a necessary light tone. It’s a little weird to think that Oliver could so easily return to the island, and in fact adds even more mysteriousness to it, since Oliver feels relatively safe there, five years later. Of course, we quickly learn that the island is not, in fact, very safe, leading to a cheesetastic sequence of Oliver saving Felicity from a landmine by swinging on vines. Short as the sequence is, it definitely rides on the camp side of things, but it’s a fun sequence nonetheless.

Oliver’s journey is, as usual, one of the best parts of the episode. We’ve said it many, many times at GATV, but Arrow has made a habit out of improving or justifying every quibble we had early in the run, and Oliver’s willingness to kill has always been a point of contention. “City of Heroes” hammers in just how imperative his run as an anti-hero was in season one, giving him the knowledge of how far he could go, but why he shouldn’t. Stephen Amell manages to keep Oliver treading the fine line between being contemplative and being mopey, clearly letting the specific choices weigh in on his heart rather than just giving him general depression. The downside to all this is that, while Amell’s performance carries an appropriate amount of subtlety, the dialogue is massively unsubtle about it. Establishing the connection to Tommy is important, but it constantly reinforces the significance of Tommy’s death to these motivations way more than necessary. The rationalization is that it makes this episode more accessible to new viewers, so it’s forgivable, but it doesn’t come off any less heavy-handed.

That said, this fact is essential to the episode’s success. Considering how controversial discussion of the “no kill” policy has become given the events of Man of Steel, it’s refreshing to see that element so deeply broken down here. Arrow presents moral codes as layered, fluid, and able to grow depending on the circumstances, a departure from the more simplistic “good guys kill, bad guys don’t” mantras of the source. At the same time, it’s not a deconstruction of those ideas, but a character-based justification of them. Oliver acknowledges that his season one self was a misguided dick, even if well-intentioned. But with the help of Team Arrow, he’s using it as a learning experience and tool of focus rather than a reason for self-loathing. Superhero fiction has tackled the “no kill” policy time and time again, but the long-form storytelling method of Arrow has allowed it to unfold in a significantly more effective manner.

There’s a clear distinction between a mission-guided vigilante and what it means to be a hero, addressed even further by way of the four-vigilante copycat team, an extreme (or is it?) version of Oliver’s season one self. The episode does, again, get a little too heavy-handed about it, but even having it hammered in that “The bad guys are like you!” doesn’t make it any less effective. And while it’s all less than subtle, having Oliver Queen get the “You have failed this city!” mantra laid on him was a darkly hilarious moment. It’s a given that the mantra is being retired now, but at least it was able to go out with a bang. 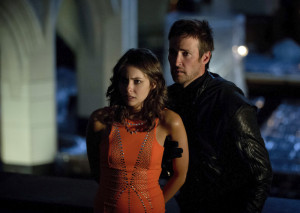 We’ve seen pieces of other characters’ journeys, and they’re all exciting. Willa Holland continues to be a secret weapon in the Arrow cast, bringing a sense of maturity to Thea this week, as she struggled to forgive her mother. Thea’s conflicted anger and love is remarkably well-done, and the scene with she and Moira (Susanna Thompson looking stunning even in prison garb) is a highlight even in this overstuffed of an episode. And if the episode didn’t give us enough good stuff, Colin Salmon made a completely unexpected (but completely welcome) comeback as Walter. We’d discussed before how important it is to keep Walter in the picture in light of recent events, so it made perfect sense to allow him to swoop in. Whether or not this means Salmon will be back in a recurring role, or will continue to have his hands in Queen Consolidated from afar, remains to be seen. Either way, acknowledging his importance to the Queen family, even in spite of Moira’s actions, is much appreciated.

That said, some elements do remain a little muddled. While giving Laurel this anti-Hood goal is actually an ingenious development, the logic behind her rationale is a little flimsy. How, exactly, did people know about the confrontation between the two archers during the Undertaking? Perhaps they pieced together what happened between the fights in “Year’s End” and Quentin’s statement to the cops, but at that, why assume that the Hood had any responsibility in the earthquake? If anything, it seems like the only evidence would point more to him trying to stop it. It’s a little weird and unclear how she came to the conclusion that the Hood is the bad guy, but if it results in giving Laurel something to do, jumping a few logical hoops might be worth it. On the positive end, the fact that she and her fathers’ places in the story have completely switched is an intriguing development. Laurel and Oliver also share more chemistry in their scenes than they ever have, mostly because their conclusions feel significantly more open and natural. The fact that they come to terms with being friends (for now) without sappy melodrama is refreshing, as is their interesting connection between Tommy and Sarah. The way Oliver brought his Sarah betrayal into the mix was a little odd—surely bringing up Laurel’s dead sister after talking about her dead boyfriend wouldn’t comfort her—but the end result has them on a more level playing field in terms of guilt, even if they aren’t exact parallels.

The flashback this week is a little light on substance, but it’s great to see it tying into the episode’s theme (Oliver’s brutal kill vs. Oliver’s decision to not kill) even if, again, it’s incredibly unsubtle. The moment itself where Oliver bashes the man’s head in admittedly comes out of nowhere, but it seems to be more of a product of cramming too much into a limited screentime than anything. The big mystery of island invaders isn’t all that interesting yet, and already doesn’t feel too different from last season, but hopefully the Oliver/Slade/Shado dynamic can at least keep things interesting. The true test of the season will be if it can keep the flashbacks relevant.

As a whole, “City of Heroes” is the start of a new journey, one that rides the crest of season one and uses both its successes and failings to propel things forward. While things will be hugely different from here on out, it doesn’t invalidate anything in season one, instead using it as a springboard to move on to bigger, better things, exactly as it should. Oliver would never choose Green Arrow as his calling card as a hero if he hadn’t experienced both the highs and lows of being a vigilante called the Hood. Season one was the origin story. Season two is the creation of the hero. Arrow has made the lows worth it, and is on the verge of making its highs even higher.