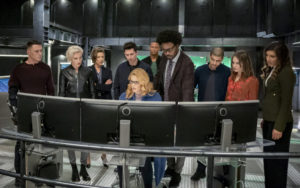 Arrow welcomed back some old friends (including Emily Bett Rickards’ Felicity), said goodbye to Oliver Queen, and set up a new reality and new situations for characters like John Diggle in “Fadeout,” the final episode of Arrow. 38% of those who voted picked that one as their favorite.

The season premiere “Starling City” also scored highly with 16% and the return of other fan favorites, and finally, the spinoff/sequel pilot “Green Arrow and the Canaries” came in at #3 with 13%.

The action-packed “Slabside Redemption” came in second place in this category with 21% of the vote and the Canary-centric “Lost Canary” clocked in at #3 with 11%.