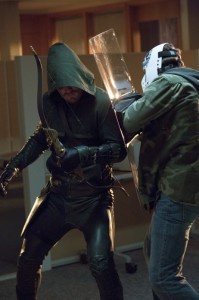 Trivia:
– Both Kyle Schmid and Sarah-Jane Redmond appeared on Smallville.
– References are made to Keystone City (home of the Flash) and Coast City (home of Green Lantern).
– “Broome’s” is surely a reference to John Broome, prolific writer from DC Comics’ Silver Age.
– “Stagg” is a reference to Simon Stagg, a known businessman in the DC Universe.
– Neither Paul Blackthorne (Quentin Lance) nor Colin Salmon (Walter Steele) appear in this episode.

On the island, Oliver hallucinates that his father is with him in the cave and hands him a gun, but it does not work when Oliver attempts to shoot himself. After waking up, Oliver throws another page of the book into the dying fire and sees the names appear when near the heat.

While Oliver and Diggle train, Oliver suggests they go after Scott Morgan, a man who overprices for utilities, but Diggle would rather stop the Royal Flush Gang, a group of dangerous bank robbers. Later, Diggle tells Oliver that Morgan attempted suicide, so Oliver rushes to the hospital, where he learns that Diggle actually lured him to help the cop who was shot at the first robbery. Oliver agrees to join Diggle’s mission and identifies the gang as the Reston family. During brunch, another bank is hit, so Oliver runs out, but could not stop them. To dig up information on the father, Oliver enlists Felicity Smoak. She finds that Derek Reston worked at a Queen steel factory, but was unjustly laid off. Oliver gives Derek the opportunity to make it right, but he declines.

CNRI’s largest donor pulled their funding, so Tommy attempts to woo Laurel by offering to host a benefit. While they are planning, Tommy tells Laurel that he misses the way he felt with her. At the benefit, Thea gets drunk after realizing that Tommy wasn’t wanting to impress her when he asked for advice on how to properly express his affection for an unnamed woman. Diggle and Oliver leave when a third bank is robbed. In the skirmish between Arrow and the gang, Derek is killed. At the end, Moira admits to Oliver that she is lonely and misses how their relationship used to be. He takes her out for a burger and milkshake.

Oliver: I don’t fight street crime. That’s a symptom of what’s wrong with this city. I’m trying to cure the disease.
Diggle: …Maybe you can make a difference if you think beyond the scope of those pages.

Laurel: Without Stagg how long can CNRI keep their doors open?
Joanna: Uh, depends. What time do you got?
Tommy: I have fiesta time, or is it siesta time? Which one means a party and which one means a nap?
Laurel: Tommy, as much as I would love to relive Intro to Spanish with you, today is not a good day.

Oliver: One of the thing I didn’t miss on the island: Sunday drivers.

Carter: One minute I’m publishing this book on how long-term potentiation initiates the creation of a slow-moving protein synthesis and the next, there’s an agent trying to make me the next Dr. Oz.
Oliver: Why would he want you to be a wizard?
Thea: For all our sakes, start reading Us Weekly.

Tommy: Don’t fade on me now. We have about ten thousand more decisions to make. Now, cake. Chocolate or mocha?
Laurel: Mmm, Carrot.
Tommy: Are you sure about that? Because Bugs Bunny hasn’t RSVP’d yet.
Laurel: Tommy, why the full court press? Asking me to Coast City? The fundraiser? Why now?
Tommy: I was at a bar last week and I was talking to this girl and things were progressing, if you know what I mean.
Laurel (sarcastically): No, you’re too subtle.
Tommy: Anyway, we finally go back to her place, and I realize all of a sudden, I’ve been there before, been with her before. Two years ago. Just didn’t remember. So I left. You know, I remember some of the mornings when you and I were together, and I made you omelets, and I’d be in your kitchen and I would think to myself, “This isn’t just fun. This is more than fun. This is different.” I never felt that way with anybody else and I miss it. (Pause) Not mocha. Carrot?
Laurel: Carrot.

Diggle: I’ll tell you this much. You say going after the guys on that list is the way you honor your dad. Well, if your dad could have seen you this week, the way you cared about the people he had hurt, the way you stepped up to try to help them, I’d say he’d be pretty damn honored. So maybe there is more than one way to save this city.