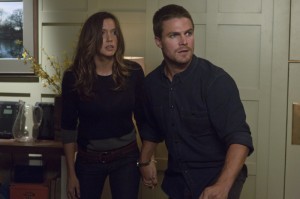 – China White is a character from the Green Arrow: Year One comic series created by Andy Diggle and Jock.
– Both Stephen Amell and Kelly Hu have appeared on The Vampire Diaries.
– “Nocenti” is a reference to Ann Nocenti, a comic book writer currently writing Green Arrow comic books.
– Laurel’s favorite ice cream flavor is rocky road.

Oliver appears in court to have his declaration of death in absentia reversed and afterwards runs into Laurel, who is prosecuting Martin Somers, a man with ties to a Chinese drug ring. Oliver finds Somers’ name in his book, so he, as Arrow, attempts to coerce Somers into confessing his role in having the father of Laurel’s client killed. Somers will not comply and later meets with China White; together they decided the only way to keep Laurel off their trail is to kill her.

Moira and Walter walk Oliver through Queen Consolidated, telling him they are dedicating a new building to his father and asking him to take part in the company. Oliver responds with a resounding “no.” Thea tells Oliver that he needs to let someone in, so he shows up at Laurel’s and they have a heart-to-heart over ice cream. They are attacked, but Diggle and Oliver fight off the assassins. Arrow goes to Somers’ warehouse and gets him to confess. While Arrow fights with China White there, police surround the place. Detective Lance stops Arrow on his way out, but he slips away after throwing Lance a device that recorded the whole conversation with Somers.

While Oliver was burring his father’s body on the island, he found the book, almost completely blank at the time except for one drawing. In present day, Moira meets with a mysterious someone who carries the same symbol that was in the book. She believes that Oliver knows nothing, not even that the yacht was sabotaged.

Oliver: This guy (Arrow) gets more airtime than the Kardashians, right?
Thea: Five years on an island and you still know who they are.
Oliver: I’ve been catching up. It’s nice to see how much our culture has improved while I was away.

Moira: You know, five years ago, your irresponsibility was somewhat charming; it is a lot less so now.

Quentin Lance: The three of you are getting around the clock police protection, okay. Get used to their faces because they’re going with you everywhere you go. No arguments.
Laurel: I’m a lawyer; I live to argue.
Quentin Lance: I’m your father; I live to keep you safe.

Thea (to Oliver): Sometimes I’d ask you, big you, to find your way home to me. Now, here you are, and the truth is, I felt closer to you when you were dead. Look, I know it was hell where you were, but it was hell here too.

Laurel: What’s in the bag?
Oliver: I thought about many things on the island, but there was one thing that I thought about every day. I actually dreamed about it and I promised myself that if I ever got a chance to do it again, I’d do it with you. Eat ice cream.

Laurel (to Oliver): I can’t exactly picture you as master of the universe.