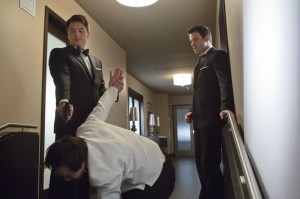 Trivia: Alex Kingston (Dinah Lance) and John Barrowman (Malcolm Merlyn) are both practically “Doctor Who royalty.” Kingston plays River Song on the series, and her first story for Doctor Who also featured Colin Salmon (Walter Steele). Barrowman was, of course, Captain Jack Harkness on both Doctor Who and its spin-off, Torchwood.
– Malcolm Merlyn mentions “Nanda Parbat,” a DC Universe location that first appeared in Deadman comic book stories. Prior to Arrow, Deadman was in development as a TV project for DC Comics, but it never ended up happening.
– Geoff Johns and Glen Winter worked together on two Smallville episodes – “Legion” and “Absolute Justice, Part 1.” Glen Winter being director was part of what lured Johns in to writing this episode.
– Look closely for references to Nightwing comics.

On the island, Slade suggests that they build a bamboo boat to escape. Instead of working on this idea, Oliver attempts to repair the radio transmitter. He begins to hear static and then clear voices, one of which is Fyers talking about Scylla, a monster in The Odyssey. Slade and Oliver figure out that Scylla is a Russian missile launcher on the island.

The Hood stops a hired killer, Guillermo Barerra, and steals his phone. Oliver asks Felicity, in the time she’s not being trained by Diggle, to break into the phone because Barerra’s work was unfinished. China White provides Floyd Lawton, aka Deadshot, with a fresh eye and a job.

Oliver and McKenna attend Tommy’s birthday celebration at Laurel’s apartment. Malcolm Merlyn shows up, uninvited, to inform Tommy that he wants his son to be there when he receives the city’s humanitarian award. Later on, Oliver dines with Tommy, where they discuss their fathers. Oliver excuses himself and interrogates a man in the kitchen about whom the triad is targeting. He does not know, but says it will happen tomorrow. While Oliver shows McKenna his future nightclub, Felicity and Diggle learn that target it Malcolm. The Hood relays the information to Detective Lance.

While Malcolm accepts his award, China White remotely cuts the power and creates chaos. Malcolm locates Tommy and leads him to his panic room. Deadshot shoots Malcolm numerous times, but since Malcolm was wearing a vest, only one bullet pierced his skin, poisoning him with curare. After a face-off with China White that was interrupted by McKenna, the Hood finds and informs Tommy that he must perform a blood transfusion to save his father. Tommy is initially hesitant, but agrees once Oliver reveals his identity. At the hospital, Malcolm orders Moira to find the traitor. Outside Laurel’s door, her mom surprises her and says Sarah may be alive.

McKenna (holding a picture frame): Oh, this is adorable. How old are you here?
Laurel: That’s actually my sister, Sarah.
McKenna: Oh, I am so sorry.
Laurel: No, no, it’s ok. I don’t know why my father bought her that canary. That thing chirped night and day, drove us all nuts.

Oliver: So, that’s the stage. Most night’s we’ll have a band, somebody cool. Is Fall Out Boy still cool?
McKenna: They broke up. And never.
Oliver: So somebody else will pick the bands.
McKenna: Is something bothering you? Don’t say, “No” because you’re a terrible liar.
Oliver: Really? I thought I was getting better at it.

Tommy: Why should I trust you?
The Hood: Because you always have.

Tommy: I once asked you what happened to you on out that island. You said, “A lot.” That doesn’t quite cover it. I saw you kill those guys who kidnapped us when you first got back, didn’t I?
Oliver: I know you have a lot of questions.
Tommy: Yeah, yeah, but for now, just the one. Were you ever going to tell me?
Oliver: No.