Katrina Law returns as Nyssa for the Arrow Season 2 finale.

The May 14 season finale of Arrow is called “Unthinkable,” and we already know a bit about it from the official synopsis that was released a few days ago… but we didn’t have any images (yet). We also were not yet allowed to tell you that an important guest star has been confirmed. Of course, this photo should give it away… 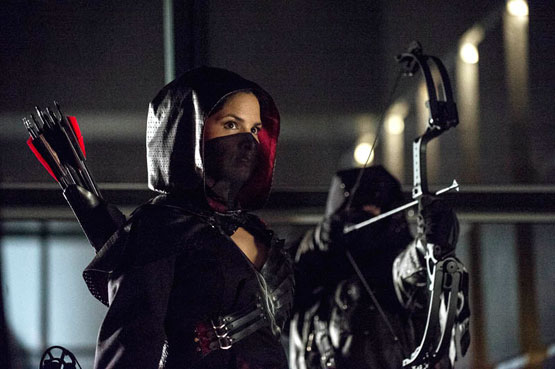 Yes, Nyssa (Katrina Law) is back in the season finale, as we learn that Sara has gone to her for reinforcements in the battle against Slade.

“[Sara] went to go get help, because when you’re fighting an army, you need an army,” Andrew Kreisberg told us. “She goes and gets Nyssa, and she comes back with the League. It’s the Arrow, Canary, Roy and the League of Assassins vs. Slade and his Mirakuru army for the city.”

Kreisberg, who as a fan of good TV is no stranger to what makes a big finale, and he was quite positive about this year’s Arrow season ender. “The finale is insane!” he enthused.