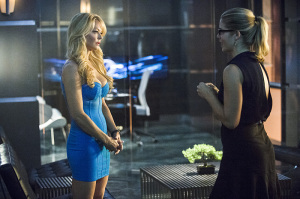 Felicity’s mom is back in the April 1 episode of Arrow, and Raylicity-haters will probably be happy with her reason for coming to town.

The SCPD in full force, eh? Did Lance figure out something? Here’s the write-up with new spoilers.

DONNA SMOAK RETURNS — During an attack on the mayor’s office, Ray (Brandon Routh) is critically injured. Felicity (Emily Bett Rickards) is pleasantly surprised when her mother, Donna Smoak (guest star Charlotte Ross), shows up at the hospital to offer her support. With the SCPD out in full force looking for the assailant, Oliver (Stephen Amell) and his team work hard to stay one step ahead of the police to find the man responsible. However, things come to a head when Ra’s al Ghul (guest star Matt Nable) kidnaps Captain Lance (Paul Blackthorne). Dwight Little directed the episode written by Marc Guggenheim & Wendy Mericle (#318). Original airdate 4/1/2015.