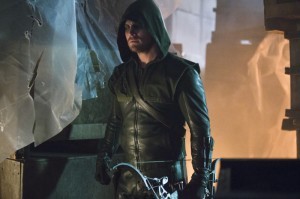 We were hoping for some good news last night, and we got it: The initial overnight ratings put last night’s Arrow, titled “Identity,” at 3.02 million viewers and a 1.1/3 rating in the key demographics.

The show rose 22% over last week in Adults 18-49, 13% in Adults 18-34, 13% in Women 18-34, and increased 10% in total viewers. It was the show’s most watched episode since April 24 and its best in the target demographics of Ages 18-49 since February.DVR ratings have been good to Arrow as well, recently: Last week’s season premiere grew significantly when DVR numbers are factored in. Either way, The CW should be happy.

Fellow Amell-tastic series The Tomorrow People at 9PM had a respectable 2.16 million with a 0.8/2.

What did you think of last night’s show? Come talk about it on our forum!

If you missed “Identity” and would like to have it to own, it is available on both iTunes and Amazon Instant Video.