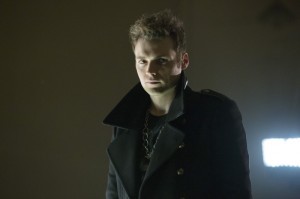 – Seth Gabel and Eugene Lipinski both appeared on Fringe, a show that had Andrew Kreisberg as one of its writers.
– Count Vertigo is a villain from Green Arrow comic books.
– Thea’s middle name is “Dearden,” a possible reference to “Mia Dearden,” the second Speedy — and first female Speedy — of the comics.

Judge Brackett denies Thea’s plea bargain, saying he wishes to make an example out of her, so Oliver asks Laurel to have her dad pull some strings. Detective Lance initially declines, but after Laurel equates Thea to Sara, he persuades the judge to agree to community service and probation under Laurel’s supervision.

At the police department, Oliver runs into an old friend, Detective McKenna Hall, and asks her for information after learning that the man supplying vertigo is the Count. Oliver brings Diggle to the Bratva HQ, where Oliver must kill a man before Alexi will arrange a meeting with the Count. Choking the man enough for him to appear dead, Oliver later orders Diggle to help the man flee. During the meet, police swarm the place, allowing the Count to escape, but not before he injects Oliver with liquid vertigo.

Oliver, fighting a drug hangover the next morning, asks Felicity to trace where the water in the liquid vertigo came from so he can find the Count’s home base. As the police close in on it, the Hood invades, fights the minions, and injects the Count with vertigo. McKenna tells Oliver the Count is in custody, but his survival is questionable due to the amount of vertigo injected. Felicity arranges a meet with Oliver, revealing that Walter found Moira’s book of names.

The men on the island create a fight ring into which Oliver is thrown opposite Yao Fei. The morning after Oliver is knocked out, Yao Fei rolls him over a cliff into a stream below. When Oliver swims to shore, he finds the map Yao Fei tucked in his jacket; it says “survive.”

Oliver: Hey, we should get going. Judges don’t appreciate the value in being fashionably late.
Thea: Got any other tips?
Oliver: Let the lawyer do all the talking. He’ll give you a pad and paper but do not play tic-tac-toe. Judges don’t appreciate that either. Come on, Speedy.
Thea: I know, I know. I keep on trying to get up and go, but I just don’t. I wish dad were here.
Oliver: I’m here.

Diggle: Just that easy, huh?
Oliver: Well, I will still need my trusty bodyguard.
Diggle: Fantastic. Looking forward to my new and exciting career as a drug dealer.

The Count: Good wine’s value is measured by its vintage, the number of years it took to ferment. Vertigo is measured in lives. Fifty-six people died to perfect this high. Believe me when I say they did not die for nothing.

Felicity (to Oliver): You look like something the cat dragged in. Not that there are cats in this building. Once a cat did get in, but a guard tased it. It smelled like fur and static in here for like a week.

Oliver: Would you mind stepping away from the window for a moment? I have a bit of a hangover.
Felicity: Sounds like you need a bloody mary and a pretzel, not the IT department.
Oliver: Actually, my buddy, Kevin, is starting an energy drink company. He says it’s fantastic for curing hangovers, but I’m very particular about what it is I put in my body.
Felicity: I’ve noticed. I said not noticed, right?

Felicity: If it’s an energy drink, why is it in a syringe?
Oliver: I ran out of sports bottles.
Diggle: Your b.s. stories are getting worse.
Oliver: Well aware.