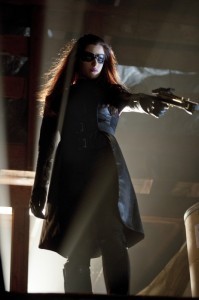 Helena runs out in the middle of her night with Oliver to take down China White and the Triad, but Oliver stops her in the process. The next day, Oliver takes her to Sara Lance’s grave, talking about his past and lecturing Helena about her chosen path.

Even though Tommy has been cut off from his father’s money, he invites Laurel to an expensive restaurant. There, the two run into Oliver and Helena and double date. After Laurel publicly confronts Tommy for not asking Oliver for a job, Tommy leaves. He and Laurel have a falling out, but soon make up. Later, Oliver gives Tommy a general manager position.

Felicity Smoak comes to Walter with more information about Moira’s investments, including that someone else was looking into them, and she hands Walter a paper with the circular symbol on it. When Moira leaves for a meeting, Walter snoops around the house and finds a little booklet similar to Oliver’s. Walter asks Felicity to find out everything she can about it. She shows him the names written inside.

Oliver bestows a crossbow and a purple-infused costume upon Helena. They interrupt a drug deal by people who work for her father and turn them over to the police. Solo, Helena murders another group of her dad’s men. The Triad invades the Bertinelli house, but Oliver thwarts them. Making a run for it, Bertinelli is shot down by Helena. Oliver stops her from killing her father, who shoots her back. She survives. Frank Bertinelli will be in jail for the rest of his life.

Helena: I’m stripping everything that has meaning to him, just like he did to me when he had Michael killed.

Oliver (to Helena): Before the island, I wasn’t a good person. I was selfish and reckless and awful and it affected people, people I love…you’re on an island too.

Oliver: I’m trying to teach you something.
Helena: What? The least effective way to shoot people?
Oliver: No. Control.

Helena (to Oliver): Does it come in purple?

Tommy (to Laurel): I don’t want to be Oliver’s charity case, to be reminded everyday that I can’t give you everything he can.

Laurel (to Tommy): I never cared about money, and truth be told, “billionaire” was your least attractive quality.

Felicity Smoak: I hate mysteries. They bug me. They need to be solved.

Diggle: This is Dig. What’s the situation?
Oliver: War.

Diggle: I don’t think love is about changing or saving a person, I think it’s about finding someone who’s already the right fit.