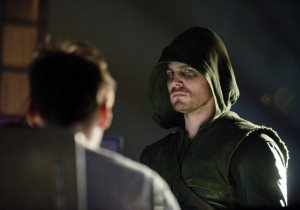 – One of the episode’s co-writers, Bryan Q. Miller, is the author of DC Comics’ Smallville Season Eleven comic book series. He served as a writer on Smallville for several seasons, penning many fan favorite episodes. Also in the comics world, he was acclaimed for his work on the Stephanie Brown Batgirl comic book series.
– Mention is made of A.R.G.U.S., an organization in the DC Universe that first appeared under the “New 52” initiative. A.R.G.U.S. in the comics stands for the Advanced Research Group for Uniting Super-Humans; we’re not sure what it means in the Arrow world. The most notable member of A.R.G.U.S. in the comics is Steve Trevor.

On the island, Shado orders Oliver to repeatedly slap a bowl of water while she exhibits yoga poses and explains that Fyers wants Yao Fei to be the scapegoat in his plan. Finally, Shado reveals that Oliver’s task was building his strength so he could pull back the bow’s string before she teaches him how to shoot an arrow.

A girl on Vertigo is killed outside of the club. The Hood visits the Count in the mental institution, but the Count is incoherent and later said to have escaped. At the aquarium, the Hood chases a man on vertigo, but he dies of an allergic reaction to the newly added antipsychotic. Oliver wonders if the Count faked his escape to throw suspicion off of him, allowing the Count to steal this ingredient from the mental institution. During another visit to the psych ward, the Hood finds the Count still there and delusional. Dr. Webb, the man behind the new Vertigo, overpowers the Hood and feeds him liquid Vertigo. The Hood activates his exploding arrow, takes an antidote, and with the distraction of Diggle fighting the accomplice doctor, kills Webb but not the Count.

Lance discovers that $10,000 is missing from Verdant’s bank account and was used to bribe the city inspector, which prompts Lance to think that the club is dealing vertigo. After acquiring a search warrant, Lance forces his way into the sublevel, but all he finds is booze that Tommy stashed to cover up for Oliver.

Diggle has Felicity secretly tracking Floyd Lawton; she uncovers who was booking Deadshot’s hits. Diggle hands this information over to Lila and drops a reference to ARGUS. Since stopping Lawton is important to Diggle, Oliver pledges to help. Tommy quits his position at the club and asks his father for a job.

Oliver: How are we doing?
Tommy: We’re in the black and the green.
Oliver: I like how we’ve gone from throwing money at clubs to catching it.

Oliver (to Slade and Shado): It’s pretty exciting that both of you are bad-asses, but don’t you think we should be making a plan to stop Fyers and save your dad?

Oliver: Remember when Slade and I rescued you?
Shado: Rescued me?
Oliver: When we rescued each other. You said you knew about Fyers’ plan. Feel like sharing? I’m almost out of slapping water.

Tommy (to Oliver): You put arrows in people who do illegal things. Last time I checked, bribing a city inspector is not legal. … Next time you try to imagine the worst of me, think of how I see you.

The Count: Looks like I’m the last one standing, sitting, spinning. … Nothing what it once was. Is there a name on the gravestone? No, it’s new and clean and waiting.