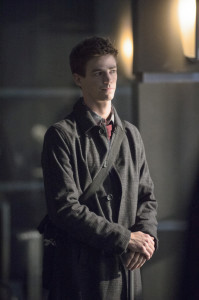 Trivia: Barry Allen first appeared in the comic books in Showcase #4. You’ll notice the magazine Barry has over his head when he first appeared has “Showcase” in the title.
– Barry’s appearances and possible spin-off were announced in the summer at the Television Critics Association press tour.
– Yes, Barry Allen will be the focus of a possible spin-off series – the first Flash TV show to actually be produced since 1990. A Flash series was proposed in 2003 but went nowhere.
– Cyrus Gold in the comics is the alter ego of Solomon Grundy. He does some very Grundy-like things here.
– Barry’s boss, Director Singh, is name-checked. He is a character in the Flash comics.
– Barry’s description of what happened to his mother is very much like something we saw in the comics for him.
– One of the writers of this episode, Geoff Johns, has written many well-received Flash comics, including Flash: Rebirth, Flashpoint, and much more.
– Grant Gustin was found after an exhaustive search for the perfect Barry Allen.
– Although credited, Katie Cassidy does not appear in this episode.

On the island, Oliver, Sara, Shado, and Slade make their way to the Japanese submarine. Onboard, they find the stash of miracle drug, but no sedative to prevent a probably fatal reaction. Slade orders Oliver to inject him because he’s almost dead anyways. The drug gives Slade bloody eyes and removes his pulse just as Ivo’s men walk in.

The astounding theft of a centrifuge at Queen Consolidated draws the attention of Barry Allen, a crime scene investigator from Central City who works cases like these in hopes of finding answers about his mom’s mysterious death. Working alongside Felicity, Barry discovers sugar in the thief’s footprints. That leads them to track the truck the thief just used to rob a blood bank. Oliver attacks the driver, but is easily overpowered. As Felicity fixes up Oliver’s wounds, he mentions seeing these abilities on the island. He destroyed all of the serum, so the thief must be trying to synthesize more. Felicity finds that the next ingredient is the sedative from an ARGUS bunker.

Malcolm orders Moira to tell Thea the truth. Moira decides she’s done being afraid and threatens him with knowledge that Ra’s Al Ghul wants him dead. Very few people attend the “Welcome Back” party Oliver throws for Moira, but Isabel shows up and Barry comes to dance with Felicity, who’s smitten by him.

Sin asks for Roy and Thea’s help to find her friend, Max, who went missing during a blood drive. They soon find that Max, not a druggie, died of an overdose. Roy sneaks a picture of the body, revealing blood draining from Max’s eyes. When Roy informs Arrow of this, Oliver cuts off their deal. During a fight with the thief, a Brother, Oliver is injected with the serum. Felicity and Diggle bring Oliver to the Arrowcave and ask Barry to save his life.

Felicity: Mrs. Queen, welcome back to the company … you look fabulous, really, better than ever. Did you do something to your hair?
Moira: Yes, I shampooed it without eight women and a guard watching.
Felicity: Is it okay to laugh? Because I was ordered not to say anything about you being in prison just to avoid any awkward exchanges.
Oliver: Like that one.

Diggle: Human weapons. My God. What’s next: aliens?
Oliver: This is real, Diggle. Those five years that I was away, I came across things that just defy explanation.

Felicity: Why couldn’t you have been marooned on Aruba?

Shado: How are you holding up?
Slade (about Oliver): I could do with a better-looking crutch.

Felicity: I was invited to a work function. It’s a party, and I have a plus one. I was thinking you would make a really good plus one.
Barry: There’s not going to be dancing, is there? I’m just not too good on my feet.

Barry: I was eleven. One night, something just came into our house like a tornado. A blur. Somewhere inside the blur, I saw a person. My dad went to fight it. I tried to get out when suddenly I was twenty blocks away from our house. Nobody believed me. They thought I was trying to cover for my father. But what I saw that night was real, as real as the man that ripped down that metal door with his bare hands. That’s why I look into cases like this. The one’s nobody believes are possible. Maybe if I can just make sense of one, I might be able to find out who really killed my mother and free my dad.

Thea: You know us Queen women. Nothing gets to us.
Roy: You must take after your dad.

Moira: And I thought it couldn’t hurt to add extra security guards.
Malcolm: It hurt them. Badly.