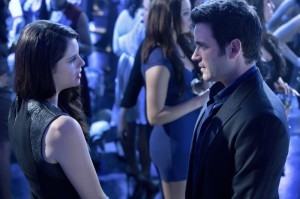 – McKenna mentions she has family in Coast City. Coast City is famous as the home of Hal Jordan, the Green Lantern.
– This episode features the first appearance of the completed Verdant nightclub.
– The day this episode aired, it was announced that Manu Bennett will be a series regular in Arrow Season 2.

On the island, Oliver and Slade work to stop Fyers and his missiles. Oliver, disguised as a man from Fyers’ camp, escorts Slade onto the base. They plan to blow up a launcher, but Oliver decides instead to take the circuit board as leverage. They radio Fyers and ask for a way off the island in exchange for the circuit board.

Diggle shows Oliver camera footage of Helena murdering Gus Sabatoni, her father’s attorney, after he failed to provider her father’s whereabouts. Helena threatens Oliver’s family to force him into helping her. While working, Thea offers Roy Harper a job at the club, Verdant, with Tommy’s approval. After Thea scolds Roy for never showing up, she is surrounded by a group of guys intimidating her. Roy speeds to her rescue.

During the club’s booming opening, Helena takes Tommy hostage and harms him until Oliver takes her side. Since there is a decoy van when Bertinelli is being transported, Oliver and Helena split up the pursuit. The police catch on, and McKenna arrests Helena. Detective Lance and McKenna try to persuade her to give them the vigilante’s name. She outs Oliver. They don’t believe her because she simultaneously taunts them. Oliver busts her out. He hands her a passport and plane ticket, but she sticks around.

While Oliver is busy apologizing to McKenna, Felicity leaves him a voicemail about a crossbow being stolen from a sporting goods store. Helena forces Felicity to give her her father’s safe house address. Helena invades, but is halted by Oliver. McKenna arrives on scene and is shot by Helena. Recovering in the hospital, McKenna reveals she’s moving to Coast City for physical therapy.

Laurel invites her father to breakfast, failing to mention that her mother is also coming. Dinah suggests that Sarah could be on one of the numerous islands surrounding the island Oliver was on. Laurel believes they should look into it to be sure, but Quentin is initially hesitant. Later, Dinah meets Quentin at the station; he’s ready to listen.

Oliver: I thought I’d give myself a rare morning in. Don’t look at me like that. The club is opening, finally. McKenna and I are going on date number six tonight, which is significant. And, uh, I don’t know. It seemed like a good day to give the bad guys a rest.
Diggle: Well, it’s the bad girls that I’m worried about.
Oliver: Helena.
Diggle: Yes. Or as I like to call her: your psycho ex-girlfriend.

Oliver: I kept this a secret to protect the people that are closest to me.
Tommy: Do you think that’s what I care about? What, that my feelings are hurt. You’re a murderer. A killer. You were my best friend in life, but now it’s like I don’t even know you.
Oliver: You’re right. I’ve changed. Listen, buddy, now I can explain to you. I can explain to you how and why.
Tommy: What would be the point? I wouldn’t believe a word of it anyway.

Diggle: If you didn’t still have feelings for this girl, you would have thought of a different solution than letting her extort you into killing someone.
Oliver: What do you want me to do? You want me to kill her?
Diggle: I think you would have a long time ago if she looked like me instead of the T-Mobile girl. She’s a stone-cold killer, Oliver.
Oliver: She’s not evil. She’s been lost since her father killed her fiancée in cold blood. And are you going to sit there and tell me that you don’t know what it’s like to want revenge.

Detective Lance: You are going away; we can’t change that, but things can be better. Or they can be worse. You tell me his name, I will do everything I can to make it better.
Helena: Oliver Queen. (to McKenna) You’re dating him now, right? … Let me let you in on a little secret. It’s not going to work out between you two. You see, Oliver has a particular talent. He uses people. He used me. He used the detective’s here daughter, excuse me,  daughters. I would get out of it before you get yourself hurt.

Felicity (to Oliver): Hey, I was multitasking, and intercepted a police report. A local sporting good store just got robbed of one high-powered crossbow. Now, could be a crazy coincidence. Or your psycho ex-girlfriend, Dig’s words, not mine, is still in town.

Fyers: My men are scouring the island for you as we speak. When they find you, they will kill you, very slowly, I’m afraid.
Oliver: If your men kill us then you’ll never find the circuit board. And after that we both know that all you’ll be left with is a really ugly piece of modern art.