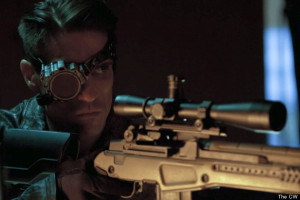 – The land of Markovia is mentioned. It is the home of Brion and Tara Markov, better known as Geo-Force of the Outsiders and Terra of the Teen Titans in the DC Universe.
– Big Belly Burger is an established chain from the DCU with its first appearance coming back in 1988 with Adventures Of Superman issue #441.
– There is also a reference to Corto Maltese, which was a location mentioned in 1989’s Batman as well as the “Justice” episode of Smallville.
– Speaking of Smallville, Floyd Lawton/Deadshot was seen in the final season of Smallville, where he was played by Bradley Stryker.

On the island, Oliver wakes up with the arrow in his chest and Yao Fei says he shot Oliver to protect him and that it’s too dangerous to be alone because “they” will kill him. After a present day workout session, Oliver goes after James Holder, a man responsible for several deaths via defective smoke detectors; however, Deadshot watches from afar and shoots Holder. Thinking that Deadshot has no code of honor, Oliver places him at the top of his list.

Oliver brings Tommy and Diggle to the warehouse, telling them he wishes to open a nightclub there. Tommy suggests they check out the competition, and while at a club, they run into Laurel and Thea. For revenge against Oliver, the owner takes him and Tommy to a back room, letting his minions loose on them. Tommy knocks some men down, and Laurel comes in to finish it off. Later, Tommy convinces Laurel that their relationship is worth a chance because he’ll become someone worthy of her. Laurel mentions that Oliver knew about them before Thea spilled it at the club.

Oliver busts into Deadshot’s room, but Deadshot escapes, leaving behind his computer, which Oliver takes to I.T. woman Felicity Smoak. She tells him it actually belongs to Mr. Patel, a man in competition with Walter Steele for Unidac Industries. Realizing he can’t protect everyone on his own, Arrow warns Detective Lance about Deadshot’s impending attack. Deadshot fires on the Unidac auction and Oliver rushes away, grabbing conveniently hidden gear. Arrow and Deadshot have a weapons battle, ending with an arrow through Deadshot’s eye. Arrow takes a wounded Diggle to his base, saves him with a potion, and reveals his identity.

Oliver: Cancers can be fought and conquered. All it takes is a surgeon, and the right instrument.

Tommy (to Laurel): Doesn’t you going out and having fun violate some kind of law, you know, the ones that are carved on a stone tablet.

Laurel (after taking down Max with martial arts): So, is this over, Max? Or are you going to have your boys pound on me next?

Oliver: I’m having some trouble with my computer and they told me that you were the person to come and see. I was at my coffee shop surfing the Web and I spilled a latte on it.
Felicity: Really?
Oliver: Yeah.
Felicity: ‘Cause these look like bullet holes.
Oliver: My coffee shop is in a bad neighborhood.

Felicity: I don’t want to get in the middle of some Shakespearean family drama thing.
Oliver: What?
Felicity: Mr. Steele marrying your mom. Claudius. Gertrude. (Points at Oliver) Hamlet.
Oliver: I didn’t study Shakespeare at any of the four schools that I dropped out of.