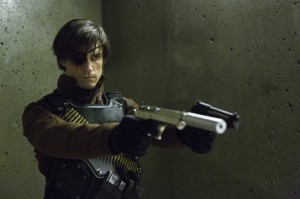 – At one point, it was considered for J. August Richards’ character to be Onomatopoeia from Kevin Smith’s run on Green Arrow comics.
– The alias “Kesel” might be a reference to DC Comics writer/artist Karl Kesel, who had a famous run on Superboy and The Adventures Of Superman comics in the 1990’s as well as Hawk And Dove. Seek out his mid-90’s Daredevil comics; they’re an underrated and forgotten gem comparable to Mark Waid’s current stories about the character.
– Lyla Michaels uses the alias “Harbinger.” DC Comics have a character named Lyla Michaels who is the worlds-spanning character Harbinger. This character isn’t quite so sci-fi.
– Co-writer Ben Sokolowski tweeted live while this episode aired on the West Coast. He says there is a Blue Jays Easter egg somewhere within.
– This episode was the first to air after filming for Season 1 has wrapped. The previous night, Stephen Amell appeared on The Tonight Show With Jay Leno.

Shado continues training Oliver to shoot a bow, but he keeps missing the target. Yao Fei enters the cave where Oliver, Shadow, and Slade are camped. Fyers’ men immediately swarm the place, and Yao Fei tells Oliver his time on the island has come to an end.

Edward Rasmus, a corrupt investment broker, hires Mr. Blank to assassinate a family whom Laurel is helping. Blank kills the parents, but the young boy escapes. Instead of allowing the child to go into foster care, Laurel takes Taylor home with her and Tommy. Blank barges into Laurel’s home and is met with Laurel’s shotgun as well as the Hood. Blank escapes, causing Laurel, Tommy, and Taylor to stay at the Queen mansion.

ARGUS and Diggle set up a scheme to arrest Floyd Lawton/Deadshot. After being forced to his knees at gunpoint, Diggle watches Lawton walk away. Oliver chose to stop Rasmus from fleeing town instead of helping catch Lawton, much to Diggle’s dismay.

With Blank having also worked his way into the Queen’s, Oliver locks Laurel, Tommy, and Taylor in a room while he fights Blank, ending it by fatally stabbing Blank. Because Tommy knows Laurel would choose Oliver if she found out his secret, he backs out of his relationship with her. Feeling betrayed, Diggle walks out on Oliver.

Roy chats with Detective Lance about the Hood and steals a police radio. Midway through his date with Thea, Roy runs out, believing he heard news about the Hood on the police radio. Lance, having set the whole thing up, takes Roy to the station, where he shows Roy and Thea the body of one of the Hood’s 26 victims. Roy insists he owes the Hood for saving his life, and Thea agrees to help Roy track him down.

Oliver: Do you want Lawton arrested?
Diggle: No.
Oliver: Then tomorrow night, we cross Floyd Lawton’s name off your list.

Moira: You must be Taylor. How about I show you where I hide the good cookies.

Felicity (to Oliver): He [Diggle] was pretty specific about where you should perch.

Laurel (to Oliver): When you first got home, I didn’t think you had changed much, but you have, and it’s nice to see.

Shado: You’re thinking too much.
Oliver: Nobody ever accused me of that before.

Thea: You don’t owe him [the Hood] anything.
Roy: You’re wrong. I owe him everything. You’re the one who’s always telling me I can be better. This is my chance. It feels like my life is connected to his.
Thea: Then let’s find him.