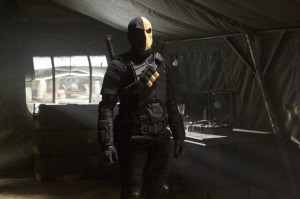 Trivia: The mention of fishnets references Black Canary’s costume (Dinah Lance’s alter-ego).
– In the comics, the mother of Dinah Laurel Lance was the original Black Canary.
– While only referred to in the episode as “Spencer,” Kate Spencer is a DC Comics character also known as Manhunter. Among the actresses who auditioned for the role was Ashley Scott, who played the Huntress on Birds Of Prey.
– A very different take on Deathstroke was seen in Smallville with Michael Hogan as Slade Wilson. Lois & Clark also had a “Deathstroke” with no connection to the comic book character. Deathstroke as seen here was first seen in The New Teen Titans #2 by Marv Wolfman and George Perez.

On the island, Yao Fei gives Oliver a short bow and arrow lesson, but when Oliver ventures into the woods to retrieve an arrow, he is captured. Edward Fyers, the leader of the group on the island, shows Oliver a picture of Yao Fei and asks if he knows him; Oliver denies it and Deathstroke tortures him. Yao Fei has a throwdown with Deathstroke and rescues Oliver, later leaving him blocked in his cave.

As Detective Lance questions Oliver, Moira and Walter interrupt and Oliver asks that Laurel represent him. At first, Laurel refuses, but she then struts into Oliver’s hearing to represent him against Kate Spencer. Oliver volunteers to take a polygraph and passes. To have witnesses of him being at home while Diggle is seen as Arrow tracking an arms dealer named Leo Mueller, Oliver throws a party. Laurel shows up to apologize and explain her father’s attitude. A man attacks Oliver at the party, but Detective Lance saves Oliver and drops all charges against him. Later on, Laurel gives Oliver the polygraph results, which she has suspicions about it. Arrow takes down Mueller.

Walter secretly meets with the head of security and asks him to move the Queen’s Gambit. Soon after, Walter is informed that the head of security was killed in a mysterious car crash. He then summons Moira to his office to tell her that he found the yacht, and she urges him to stop digging because it is dangerous. Moira meets with the Well-Dressed Man, who sent the assassin after Oliver. Walter leaves for a “business trip” to Australia.

Moira (to Laurel): Your idealism, I think, is why my son for all his mistakes is so smitten with you.

Oliver: I knew you couldn’t resist saving my a$$.
Laurel: You’re gonna make me regret this, aren’t you?
Oliver: No. It’s going to be like old times.
Laurel: Fortunately, for you, with the legal case, there’s no way that you’re this vigilante.
Oliver: I agree.
Laurel: Because he’s actually trying to make a difference. We both know that’s not really your style.

Oliver: You know us billionaire vigilantes, we do love our toys.

Oliver: Hey, Speedy, one of the workers left a keg too far from the bar. Can you ask them to move it, please? I got the ankle thingy. I don’t want to set off a SWAT invasion.

Thea: You’re out all the time. You have those scars. And since you’ve been back you’ve been acting really weird…And you gave me this, I mean, it’s an arrowhead.
Oliver: Thea, I bought that in the gift shop of the Beijing airport. Now I’m sort of happy I didn’t buy you the shot glass with a panda on it ‘cause then you’d be worried I was Panda Man.

Laurel: Wow. I can’t remember the last time that I’ve been in this room.
Oliver: I can. Halloween, 2005. We were getting ready for Tommy’s party.
Laurel: Ah, yes. I wore those horrible fishnets.

Oliver: Why don’t you hate me? You should.
Laurel: I did, for so long, I did, Ollie. But after today, I realized that I was so focused on what happened to my family that I didn’t even stop and wonder what could have happened to you.

Laurel: How did you survive this?
Oliver: There were times when I wanted to die. In the end, there was something I wanted more.

Moira (to the Well-Dressed Man): I’ve been the good soldier. I’ve done everything you’ve asked, but if any member of my family so much as gets a paper cut, I will burn your entire world to ashes.

Oliver (to Laurel): Do you want to know why I don’t talk about what happened to me there. Because if people knew, if you knew, you’d see me differently, and not as some vigilante guy, as damaged. I don’t sleep. I barely eat. I can barely sign my name, let alone aim a bow and arrow.