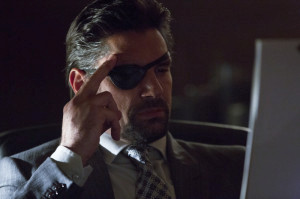 On the island, Oliver doesn’t jump onboard with Sara’s suggestion to find Slade then take Ivo’s offer. Oliver apologizes for it being his fault she’s stranded, but she accepts responsibility for agreeing to get on the Gambit. While Oliver sleeps, Sara swipes the walkie and contacts Ivo, who says he needs her to “save” him again. Sara confesses she’d rather be dead, so he threatens to find and torture them both.

Blood asks his mom about Laurel’s visit. Maya tells the truth and is killed by a masked Brother. Laurel hears that Maya died and asks Donner to investigate Blood. He won’t. In a meeting set up by Lance, Laurel succeeds in recruiting Arrow. Upon investigation, Felicity finds that there’s only a physical copy of the file on Blood’s father’s murder. Needing help to locate it, Arrow and Laurel break into city archives, only to emerge after a gunfight with an empty folder – Slade stole it.

Blood calls Brother Daily for help, so he gets Laurel arrested for felony drug possession. She’s soon released, and not even her father believes her theory. Back at her apartment with an off-guard Oliver, Blood’s men abduct Laurel. Arrow comes to her rescue and tussles with a Brother. It’s Laurel who stops the fight when she shoots the masked man, who turns out to be Officer Daily. No charges are pressed, but Donner fires Laurel. Slade, clad as Deathstroke, takes out four of Blood’s men and threatens to kill him next if he causes another problem like this.

Roy demonstrates his new strength to Sin, who urges him to tell Thea, but he refuses and wants to save the city without Arrow’s help. As Thea is still giving Roy the cold shoulder, Sin comes to him with a case – the Starling City Slasher kills prostitutes but gets away with it because he’s a hotshot lawyer. Sin goes undercover as bait, and when they find the Slasher, Roy loses control, almost beating him to death. Sin calls Thea to the hospital and admits that Roy put the man there. Arrow agrees to train Roy so he’ll be in control of his powers.

Oliver: Roy’s not the kind of guy who’s comfortable discussing his feelings.
Diggle: Not like you and me.
Felicity: Don’t yell at me, but I really think we need a new plan on how to find this creepy masked guy. Scaring the crap out of low-lifes isn’t yielding results.

Laurel: You’re late.
Arrow: I had to circle around to make sure there wasn’t a SWAT team waiting for me again.
Laurel: That’s fair.

Sara: Do you remember when you spill that beer on me at Tommy’s party?
Oliver: No, but I never left one of Tommy’s parties with my memory intact.

Sin: Am I interrupting?
Thea: He (Roy) and I would actually have to be talking for you to be interrupting.
Sin: Can I try?
Thea: Be my guest.