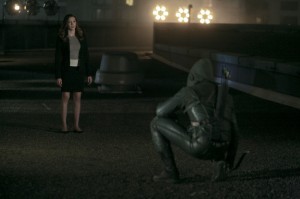 – Guest star John Barrowman is perhaps best known for his role as Captain Jack Harkness on the TV series Doctor Who and Torchwood.
– Barrowman is also a noted stage actor and played “Billy Crocker” in “Anything Goes” – the same role that Colin Donnell was famous for playing.
– John Diggle’s brother who was killed by Floyd Lawton, aka Deadshot, was named “Andy.” Andy Diggle was the author of Green Arrow: Year One. He will soon be taking over as writer of Action Comics featuring Superman for DC.
– At one point the title of this episode was “Salvage.”

In the aftermath of last week’s reveal, Diggle resigns and is replaced. At home, Oliver hears about Peter Declan’s upcoming execution for murdering his wife, Camille. Once Oliver realizes that Camille worked for Jason Brodeur, a name on the list, he investigates and finds that she planned to turn in Brodeur for dumping toxic waste. Laurel comes home to find Arrow asking for help in proving that Declan was framed. Later, Arrow coerces Matt Istook, Camille’s supervisor, to give up the incriminating file. Arrow gives the file to Laurel, but the judge will not delay the execution. While forcing Brodeur to confess, Arrow hears that his men are executing Declan themselves. Arrow breaks into the jail and leads Laurel and Declan out. Something Laurel says prompts her father to review surveillance footage from the Unidac auction and he sees Oliver with his gear. After Diggle accepts Oliver’s offer to work with him, Detective Lance arrests Oliver for a variety of offenses, including acting as a vigilante and murder.

Meanwhile, Walter discovers that 2.6 million dollars was withdrawn from the company. Moira says she used the money on a friend’s start-up venture. Suspicious, Walter secretly enlists Felicity Smoak’s help, and she finds that a warehouse in Starling City was purchased. Inside, Walter sees the Queen’s Gambit split in half. Moira meets the Well-Dressed man, who informs her that Arrow is taking out “the list.”

Back on the island, Yeo Fei gives Oliver a trapped bird, indicating that Oliver has to kill it to eat. Oliver takes a while to do so, after which, Yao Fei reveals that he speaks English. Noticing that Oliver constantly stares at a picture of Laurel, he warns Oliver to forget her or he will not survive.

Diggle: You really did lose your mind on that island.
Oliver: Found a couple things along the way.
Diggle: Like what? Archery classes?
Oliver: Clarity.

Joanna: You know, if you go somewhere that’s not work or your home, your odds of meeting someone increase by like a gazillion percent.
Laurel: Oh, that’s not true. I could still get mugged on the way home.
Joanna: In that case, I hope he’s cute and single.

Laurel: There are a thousand lawyers in Starling City, why me?
Arrow: We’re both trying to help.
Laurel: What makes you so sure I’m going to help you?
Arrow: Because I know you’d do anything to save the life of an innocent man.

Laurel: But he goes against everything that I was ever taught to believe in. He breaks the law, and God knows what else.
Joanna: How are you not afraid that he is going to do God knows what to you?
Laurel: He won’t. I don’t know. I can feel it.

Laurel (to Arrow): I think there’s too many people in this city who only care about themselves. People who are selfish. I think they need someone who cares about the lives of other people. Someone like you.

Thea: Oh my God. What is wrong with your face? There’s something really weird on it, like this thing with your mouth. It looks like it’s in the shape of a smile. So, why are you grinning?
Oliver: I took your advice with Laurel to be myself.

Thea: I got mad relationship skills, bro. Let me know if you need trendy places to propose.