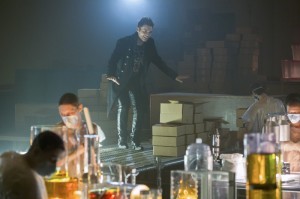 Summary: A discordant episode that stands on the edge of your nerves but makes you like and appreciate it because of that. Or you don’t.

Angered by his sister’s drug use and potential jail time, Oliver pursues the Vertigo trade in the city to find its source. When information leads to the drug’s creator, a violent oddball referred to on the street strictly as “the Count,” Oliver makes it his mission to take him down and shut down the operation. Using his Russian mafia connections, Oliver sets a meeting that puts the two on a path to confrontation. Meanwhile, as Thea’s judge wants to make an example of her, Oliver asks Laurel if she can call in favors to keep Thea out of jail.

There is a voiced concern amongst some of the audience about a perceived repetition of the series, one they feel takes away from their full enjoyment. While it would be hard to argue there isn’t some validity to that concern, in this day and age of instant gratification, patience appears to be a luxury. It is difficult not to find this opinion disconcerting given the show is in its first season, a time when series — high concept ones like this, in particular — are finding their voice, tone, structure, personality. In fact, one could argue that, even with the decidedly episodic quality of the list plot device and its corresponding “villains,” the show has done strong work in establishing serialized threads that many might not be allowing themselves to see.

The showrunners recognize and acknowledge this as deliberate set-up for the world that is to come. The first taste of that world arrives in this latest episode with the introduction of a villain decidedly bigger than anything they’ve done to date. In a season that’s already presented China White, Deadshot, Deathstroke, the Royal Flush Gang, Firefly, and Merlyn the Dark Archer, it seems weird to accord “the Count” with the distinction of being the first “comic book” villain. Yet, it’s true.

By bigger, it’s to be said that the personality and the portrayal of the character is broader and more outlandish than the established grounded quality of the environment of the series. It’s a decision that can border on camp as much as intrigue and guest star Seth Gabel walks a tightrope here. It is a polarizing performance, one the doesn’t allow for a lot of middle ground as far as audience response. Either you buy into the wild-eyed malevolence of the drug pusher or you don’t. Some will complain that there was a bit too much of one of Gabel’s self-identified influences in the performance, that of Heath Ledger’s take on the Joker in The Dark Knight. Gabel’s style actual feels closer to another from the Nolan Bat oeuvre, Cillian Murphy’s Jonathan Crane, aka the Scarecrow.

In the end, the question becomes did the character work in the episode. That’s a resounding yes. For a chapter that focused on drugs and the perilously thin line between life and death, and allowed the audience a POV of the effects of the Vertigo drug, the garish quality of Gabel’s performance was appropriate and raised the stakes of the series as a whole. Like alcohol or a rich dessert, though, it’s the type of character you’d like to experience again but only in small measure to effectively appreciate him. As an occasional thorn in Oliver’s side, the Count should be a marvelous wild card, especially once we see the effects of the overdose of Vertigo on him. The follow-up question is did he dramatically change the landscape of villainy in the series, as was part of the intention. Frankly, that remains to be seen.

One of the more interesting aspects of the episode was delving further into Oliver’s past with the Bratva Russian mafia. Using those connections as a way to get close to the Count was a well-devised stroke and it touched on one of the bigger questions about the five years Oliver was gone. It’s important now to distinguish the five years in total Oliver was gone from Starling City and the time he was on the island because Oliver’s association with the Bratva has always suggested that he might not have spent the entire five years shipwrecked there. The island flashbacks, the strongest connected to the present day story to date, added to the disclarity, proffering Oliver might find a way off the island as guided by Yao Fei’s direction. This plays upon a line from last week’s episode about Oliver discovering the intentions of his father’s list off the island. Fittingly, this offered no real answers just more questions, one of those serialized aspects of the show.

Part of the joy in seeing the Bratva storyline was Oliver bringing Diggle into the fold. In fact, other than his solo assault on the Vertigo production operation, Ollie and Dig were latched at the hip throughout the episode, which went a long way toward involving Diggle in the day-to-day of the hero biz rather than just hanging back at camp. As this is still the best relationship on the show, it gave a great glimpse into how well Amell and Ramsey have gelled together, both doing strong work throughout the episode. Their interaction walking out of the Bratva car shop was a particular highlight, as was Diggle’s emergency detox of Oliver suffering the effects of the concentrated Vertigo, and Diggle admonishing Ollie’s umpteenth lame excuse to get Felicity to do work for him. Their timing is cracking and it bodes well for their partnership deepening as it goes on.

Speaking of Felicity, it’s practically a lock at this point that she will be brought into Team Arrow. Not only have they exhausted the trope of Oliver using her skills “blindly” but her approaching him with Moira’s list to help was all but an affirmation that she knows exactly where Mr. Queen has been spending his nights. This is an exciting development for not only Oliver’s mission but for the fan-favorite quirky IT pro. The chemistry between Emily Bett Rickards and Amell allows for him to play more of Oliver’s humor and charm, which adds a much needed quality to the seriousness and bravado of the current denizens of the Arrowcave. There’s also a beautiful sequence of small moments when Oliver processes Felicity presenting him with the list and telling him about Walter’s investigation — as he realizes that his mother’s involvement — that added all new levels to Amell’s performance. If Felicity and Rickards can help bring out more of this emotionality, the series will be all the better for it.

About the only thing that didn’t work in the episode was Thea’s story. Not the plotting of it as much as the adolescent anger. Though featuring a wonderful raw moment when Oliver tells her the truth about their father — and nothing against Willa Holland — it was a bit of chore to sit through Thea’s arc. Her accusations against her mother of impropriety were already bordering on tedious last episode. To spend two-thirds of this episode espousing the same things kept everything at one level and boring as a result. Thankfully, mercifully, they nipped this in the bud before it thoroughly ruined Thea’s character. Ironically, the best thing to come of it didn’t involve the character at all: the scene where Laurel asks her father to help Thea out with the court. Here’s hoping Thea working with Laurel at CNRI will open up better story possibilities for her.

Overall, there was much to appreciate about this episode even if it didn’t go down the easiest. Like a dissonant symphony or an extremely sharp cheddar, it was one to like but with the edge of a distinct flair or taste.

“Vertigo” is a really strange outing to judge. There’s a lot of potential here, and there’s an adamant attempt at clever execution and some fun, but it simultaneously highlights some of the aspects that are holding the show back.

Honestly, I’d probably be extremely negative about The Count if I didn’t already like Seth Gabel (and am aware of his acting ability.) But objectively, Gabel falls into the same trap Tamoh Penikett fell into; they tried to ham up a comic book-like performance in a show that’s distinctly not very comic bookish at this point. Gabel’s performance isn’t bad, and there is certainly some nuance there, but it doesn’t fit into the world as it’s been set-up thus far.

At the same time, Arrow kind of needs this kind of color; not every villain can be the standard brooding or ruthless mob boss or corrupt businessman. The Count wasn’t a completely failed attempt at introducing something different to the world, but it was probably too much too fast in terms of wackiness. There also could have been an opportunity to keep him somewhat subdued here, but have him become more manic in subsequent appearances after his overdose and breakdown.

Thea’s arc is a mixed bag, too. The tension her hatred for her mother causes is palpable and engaging, and Susanna Thompson does a remarkable job as she takes the abuse. The problem is that Thea is the utmost annoying and unlikeable here. Saying she’s not at her smartest because she’s a mess of a teenager with issues is valid, but she’s blasé about going to prison because she’s mad at her mom. This goes way above and beyond genuine teen angst, and seems far too much like forced family drama. This is especially frustrating, considering the drama is already fairly engaging without Thea’s ridiculous rebellion. It does, however, give Laurel some relevance, what with this new sisterly bond that’s being worked in.

The addition of the McKenna Hall character has potential (and it kind of seemed like she might learn Oliver’s identity sooner than later.) Giving Oliver a love interest with a non-melodramatic history that could also be relevant to the plot is exciting, especially since the show could use more female characters in on the action. Having Felicity move along the conspiracy story is also a welcome development. Hopefully Oliver will use this as a springboard to bring her on to his vigilante team.

A less than perfect episode, “Vertigo” introduces some fun elements with great potential, but maybe not at the right time. Villains with more colorful personality are good, but we might need to be phased in more. And while many of these plot development could lead to great stuff, the journey thus far—particularly Thea—has been more than rocky.