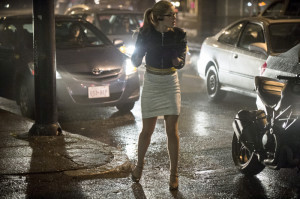 Although the Felicity backstory episode of Arrow was originally announced as “Oracle,” a new interview with EW.com reveals that is no longer the case.

Per EW, the new title of the episode is “The Secret Origin of Felicity Smoak.” That’s also the episode where we first meet Felicity’s mom, a cocktail waitress in Las Vegas.

“She and Felicity are two very different people,” Executive Producer Marc Guggenheim told EW. “Episode 5, which is when Felicity’s mom comes to town, really deals with the differences between these two women and how much of their relationship is a struggle as a result. It’s a real challenge for these two people to find some common ground.” And Felicity’s father? Don’t expect answers just yet.

You can read the full EW piece here; a compiled list of Season 3 spoilers can be found here on GreenArrowTV.